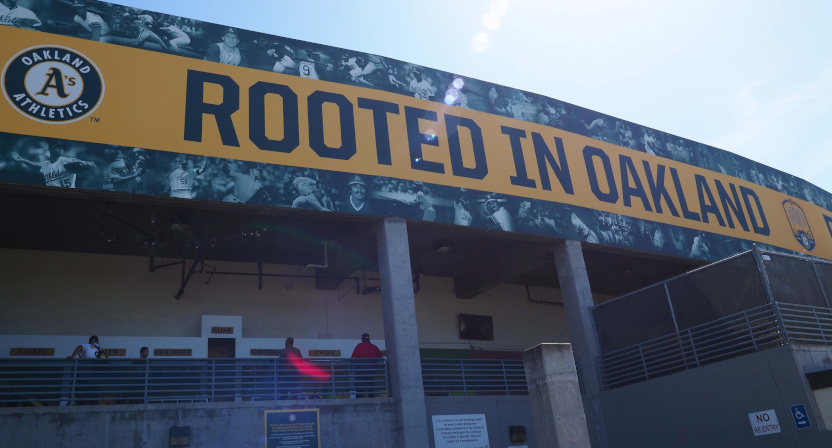 There’s a long history of MLB owners crying poor, including with bizarre claims about how much they’ll lose in a season with no fans. The league regularly uses accounting methods that let it claim “losses” many are highly skeptical of, doesn’t include revenues from things like BAMTech or equity in regional sports networks, and projected “losses” for the 2020 season even before the COVID-19 coronavirus hit. But the Oakland A’s are going even further than most, refusing to submit their annual $1.2 million rent payment (which was due April 1) to the Coliseum Authority (a joint-powers group set up by the city of Oakland and Alameda County to oversee the Oakland-Alameda County Coliseum) and claiming “no ability to pay.” Here’s more on that from David DeBolt in The (San Jose) Mercury News:

The Oakland Athletics have refused to pay $1.2 million required under contract to use the Coliseum, the head of the stadium authority confirmed Tuesday.

A’s executives told Coliseum Authority Interim Executive Director Henry Gardner they had “no ability to pay” the annual payment, due April 1. An attorney for the A’s, however, said it remains unclear if the stadium would be available to the team, due to the possibility of it being used as a COVID-19 patient site.

…“They said because they haven’t used it, they were not able to generate revenue and they have no ability to pay,” Gardner said Tuesday.

…Under a license agreement, the A’s are obligated to make the payment annually for use of the city and county-owned baseball stadium and could face penalties for failure to pay. Gardner said the Stadium Authority is willing to negotiate.

“We recognize that we’ve all been upended in a number of ways,” Gardner said “Maybe there are some things we are willing to negotiate and waive but we can’t just say no rent.”

This is quite the claim from the A’s, especially as, as many noted, their owner has plenty of money:

DeBolt’s piece does also note that A’s general counsel D’Lorna Ellis sent a March 31 letter saying they were deferring payment “until we have a better understanding of when the Coliseum will be available for our use,” citing the possible use of the building as a surge site for COVID-19 relief efforts (which has not happened). Susan Slusser of The San Francisco Chronicle tweeted a portion of that letter:

The @sfchronicle has obtained the letter the A’s sent to the Coliseum Authority advising them that they would defer their annual rent payment specifically because the building was not available for their use as per provisions in the contract. Zero mention of revenue: pic.twitter.com/xnj7OjafJW

There’s of course a long history of the A’s going back and forth with the city and county over various plans for a new stadium, so this isn’t the first acrimony between the sides. And yes, the A’s aren’t getting their usual revenues right now, and yes, it’s far from clear that they’ll actually play baseball games at the Coliseum this year. But it still feels like a bad look for them to be holding out on this payment to local governments while they, and their billionaire owner, are in a much better financial position than many people. You don’t expect a MLB team to be leading a rent strike movement.