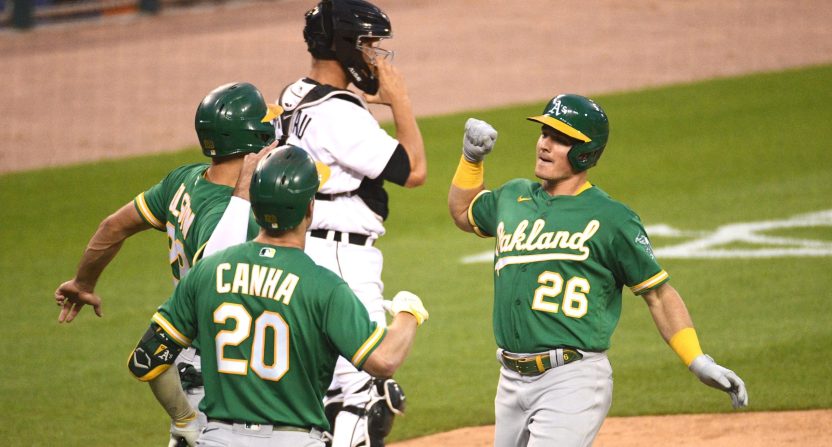 The team that opens the season for the Oakland Athletics will look a lot different than the one that finished the 2021 campaign.

First baseman Matt Olson was traded to the Atlanta Braves on Tuesday. On Wednesday, third baseman Matt Chapman was dealt to the Toronto Blue Jays.

Olson was an All-Star in 2021 and finished eighth in American League MVP voting. Chapman had something of a down year in 2021, but he was an All-Star in 2019, finished sixth in AL MVP voting that year, and seventh the year before. Both are exemplary defenders, with Chapman having three Gold Gloves and Olson having two. Both are young as well. Olson will turn 28 in March, while Chapman will turn 29 in April.

The Oakland departures were not limited to the two Matts, either. They were merely two of what can only be described as a mass exodus.

Even worse for the Oakland fans, the deals are likely not done.

Tigers and Twins are among many teams trying to land either of two available A’s star starters — Sean Manaea or Frankie Montas. A’s fire sale continues.

On one hand, this is something that the A’s and their fans are familiar with. If you read or saw Moneyball, you know that.

Still, this much talent leaving in one offseason is not something Oakland has seen since the mid-70s, when the team that won three World Series in a row from 1972-1974 was broken up.

The A’s and their fans took to Twitter with commentary on the departures that was equal parts funny and sad.

POV: you are an A's vendor in 2022 pic.twitter.com/B0YkwufvwA

The Oakland A's had a .579 winning percentage over the past four seasons, and are now going in full fire sale mode because of cheap owners. Yikes.

I just don’t understand how the Jays think they could take a former left side infielder for the Oakland A’s coming off a down year and turn them into something worth while. Anyways, here’s two unrelated photographs. pic.twitter.com/IoQPrgnj3l

“Fine, you want a team? See how you like it without any players!”

The Oakland A's to all of MLB: "YOU GET AN A, YOU GET AN A, EVERYBODY GETS AN OAKLAND A!" pic.twitter.com/NyqcQFV24K

If history has taught us anything, the A’s are good at rebuilds. Chances are, they’ll be competitive again within three or four years.

Still, 2022 might be a rough season for an Oakland fanbase that is nothing if not faithful.