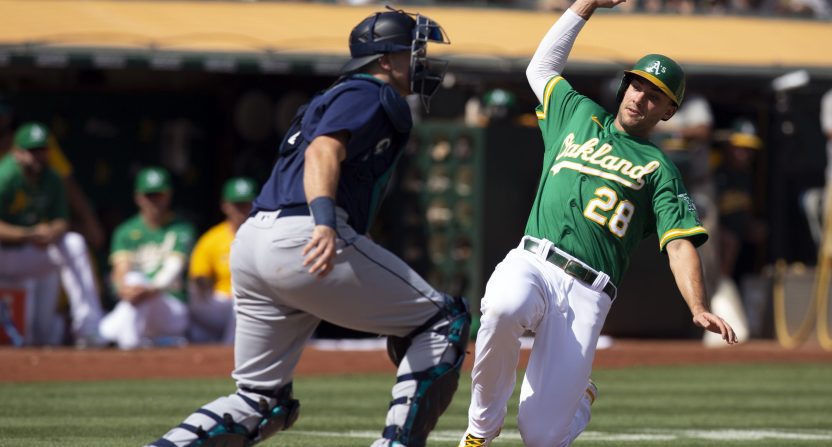 The Major League Baseball season is officially back that MLB and the MLBPA have come to terms on a new labor deal. That has kicked off what was expected to be a crazy free agency period considering how fast teams will need to get things in order before Opening Day.

Monday has brought us our first big blockbuster trade of the offseason as the Oakland Athletics and Atlanta Braves have agreed to a trade involving star first baseman Matt Olson.

BREAKING: Atlanta and Oakland are in agreement on a trade that will send star first baseman Matt Olson to the Braves, sources familiar with the deal tell ESPN.

The Braves will be giving up outfield Christian Pache, catcher Shea Langeliers, and starting pitchers Ryan Cusick and Joey Estes in return for Olson.

This return package for Olson that the Athletics will receive involves four of the top 15 prospects in the Braves organization, a huge haul in what seems to be a sign of the A’s planning to rebuild for the future.

The 27-year-old first baseman has been an excellent player six seasons into his MLB career, hitting a career-high 39 home runs last season while making his first All-Star game.

This trade has garnered a ton of mixed reactions from each fanbase involved in the deal. Many Atlanta fans are certainly excited to see a player of Olson’s caliber play for their team next season.

Matt Olson’s Spray Chart from 2021. If you’re in the Chop House, watch your head.

Olson is a pull hitter, but the shift is banned beginning in 2023*. Hometown kid have a lot of fun in Truist Park. pic.twitter.com/LiP8hbLVT1

However, many feel that the team may have given up too much considering how highly ranked those Braves prospects are.

A’s receive a kings ransom from the #Braves for Olson. https://t.co/8rbDw3cAzq

Langeliers and Pache are both Top 100 Prospects, Cusick was a first-round pick last year and Estes was a breakout low-level prospect. Big haul. https://t.co/KpZn0GX8eR

Many are also speculating that this means that the Braves will not be re-signing first baseman Freddie Freeman, who is amongst the most notable free agents this offseason.

I know there's a lot of factors in play, but I'll never understand why the #Braves didn't just resign Freeman. https://t.co/n7Sz6O63gH

So the Braves gave up a haul for Matt Olson, who's a good player but not as good as Freddie Freeman, when they could have just re-signed the face of their franchise? I don't get it. https://t.co/WODDQM0hZV

Wired: Trading a bunch of good prospects for his replacement https://t.co/8kbexT0xuR

maybe just sign freddie freeman and keep all of those guys, idk https://t.co/R2Lu04ULcl

This is a trade that will certainly shape the future of both franchises going forward. The Athletics get a huge haul in return for Olson, and the Braves potentially get their All-Star replacement for Freeman.

While it is not a foregone conclusion that Freeman will leave the Braves, especially considering the National League now has a DH spot, it certainly hints strongly that Atlanta is ready to move on without him.