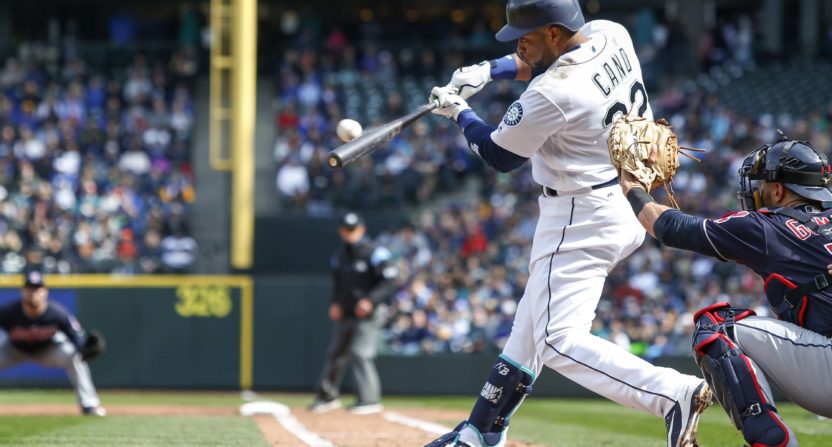 For baseball fans, April is supposed to be a time of hope and belief and wide-eyed optimism. It’s the month when everyone has a shot, when even the wildest of pipe dreams is possible, at least in theory.

And so, in the interest of imbuing some of that optimism back into April, we have come up with one reason for optimism for each of baseball’s 30 teams. Because ultimately, every baseball fan should have something to smile about.

Arizona Diamondbacks (12-4) — Not only do the Diamondbacks have a great record, they also have the best run differential in the National League, having scored 27 more runs than their opponents. That’s good reason to believe that their quick start can be sustainable long-term.

Atlanta Braves (9-7) — If early returns in 2018 are any indication, the Braves’ young middle infield of Dansby Swanson and Ozzie Albies could make noise in the National League for a long time. Swanson has bounced back from a down season to hit a robust .344/.373/.531, while Albies has broken out to the tune of .310/.338/.662. Almost any team in baseball would gladly trade middle infields with Atlanta.

Chicago White Sox (4-10)  — The White Sox weren’t supposed to contend this season, so there’s no sense sweating their record. What’s important is that their young players get major-league reps. And if all those prospects perform like 24-year-old Reynaldo Lopez (1.42 ERA, 21 Ks in 19 innings), that’s even better.

Boston Red Sox (14-2) — This one doesn’t take much explaining. The Red Sox have the best record in baseball and rank near the top of the league in both runs scored and runs allowed. This is a talented team for whom everything is clicking.

Baltimore Orioles (5-12) — The Orioles’ awful start could wind up being a blessing. If Baltimore is comfortably out of the playoff race come July, the front office won’t have to feel bad about making the future-focused moves the franchise probably needs, including a potential trade of Manny Machado.

Chicago Cubs (7-7) — The Cubs know from last year that an uninspired start doesn’t mean much over a long season. If the 2017 team could hover around .500 until mid-July and still win 92 games and a division title, this equally talented bunch can certainly withstand a rough first few weeks.

Cincinnati Reds (3-14) — The chief reason for optimism in Cincinnati is simply that things can’t get much worse. Joey Votto won’t end the season with a .574 OPS. Billy Hamilton and Adam Duvall won’t wind up with batting averages under .200. Luis Castillo won’t keep up a 6.75 ERA. And once those guys bounce back, the Reds’ record will improve.

Cleveland Indians (9-6) — The Indians’ haven’t dominated opponents so far this season, but they remain a good bet to finish with one of the AL’s best records for a simple reason: Their division appears every bit as weak as it was expected to be. As long as Cleveland plays solid ball, it will claim another AL Central crown.

Colorado Rockies (11-8) — Due to the high altitude and deep dimensions of Coors Field, the Rockies typically rank near the top of the league in batting average on balls in play. So the fact that the team’s BABIP currently ranks 29th in baseball is a great indication that they’re suffering from bad batted-ball luck that won’t last long.

Detroit Tigers (5-9) — The Tigers certainly have not been good, but nor have they been unwatchably bad. In fact, their run differential and third-order win-loss record suggest they belong around .500, per FanGraphs. Even if this team can’t contend, maybe it can keep its proverbial head above water and give fans reasons to watch all summer.

Houston Astros (11-7) — The defending champs’ lineup is off to a slow start, but their pitching staff, led by Justin Verlander (1.35 ERA) and Gerrit Cole (1.29 ERA) has been incredible, with an MLB-best 2.62 ERA. When the hitters inevitably come around, this team will be fearsome.

Kansas City Royals (3-12) — The Royals won’t make the playoffs this season, but if even a couple of Mike Moustakas, Ian Kennedy, Lucas Duda and Kelvin Herrera continue their hot starts, Kansas City will have some valuable assets to deal at the trade deadline for the next generation of Royals stars.

Los Angeles Angels (13-4) — Reasons for optimism are abundant out in Anaheim. Mike Trout is his usual MVP-caliber self; Shohei Ohtani looks like a two-way star; Ian Kinsler, Justin Upton and Andrelton Simmons are off to hot starts and the team has one of baseball’s best records. The Angels have solidified their status as a wild-card front-runner.

Los Angeles Dodgers (7-9) — Slow start aside, the Dodgers are massively, massively talented, as we all saw during their run to the World Series last year. There’s simply no chance a team with Clayton Kershaw, Corey Seager, Cody Bellinger and Kenley Jansen could play sub-.500 ball for more than a few weeks at a time.

Miami Marlins (5-12) — You didn’t think we’d skip Miami, did you? Even with one of baseball’s least impressive rosters, the Marlins can be happy with the early performance of projects such as Drew Steckenrider (no earned runs allowed in nine relief appearances), Jarlin Garcia (0.86 ERA in 21 innings) and Miguel Rojas (.789 OPS, plus strong defense at shortstop).

Milwaukee Brewers (9-9) — The Brewers have had a lot go wrong already this season, from injuries to underperformance, yet they’ve managed to remain at .500, ahead of the division-favorite Cubs. Once the bad breaks stop, they’ll be well-positioned for another playoff run.

Minnesota Twins (7-5) — The Twins two best players have been one of their youngest and one of their oldest. Jose Berrios, 23, has looked like an ace thus far, with a 2.18 ERA and more than a strikeout per inning, while Joe Mauer, 34, is hitting a ridiculous .378/.531/.486. If both keep playing as if they’re in their primes, this team could be fearsome.

New York Yankees (8-8) — Giancarlo Stanton is not off to the start he dreamed of, with more than twice as many strikeouts as hits so far this season. But Stanton is no stranger to slow Aprils. On this date last year, he was hitting .226 with three home runs and a .715 OPS, but he soon heated up and eventually won the NL MVP award. Once Giancarlo gets going, he and the red-hot Aaron Judge will form the powerful tag-team the Yankees expected all along.

New York Mets (12-4) — The Mets’ first few weeks have finally answered the question of what happens when their five 20-something starting pitchers are all healthy at once. And although continued health certainly isn’t guaranteed, there’s nothing more promising for this organization than to see those five injury-free and mowing down hitters. The more they’re on the mound, the more games the Mets will win.

Oakland Athletics (8-10) — Once again, the Athletics seem to have turned a modestly touted player into a star in time to reap his cheap pre-arbitration years. This time, it’s Matt Chapman, a great defensive third baseman coming off a solid rookie year, whose .313/.413/.609 slash line has helped make him one of the league’s most valuable players. At 24 years old, he looks like a potential cornerstone.

Philadelphia Phillies (10-6) — The Gabe Kapler Experience has settled down as the Phillies have won nine of their last 11 games. The best part is, they’re getting big contribution from their promising young core, led by Aaron Nola, Odubel Herrera and Rhys Hoskins. Philadelphia might stick around the race all summer and will surely be a force in the NL East far beyond that.

Pittsburgh Pirates (11-6) — After looking like a sub-.500 team heading into the season, the Pirates find themselves in first place in a strong division. Every year a team or two comes from nowhere to make a run at the playoffs, and there’s no reason that Pittsburgh can’t be that team in 2018.

San Diego Padres (7-12) — A poor first few weeks for the Padres only increases the odds that their top prospects will arrive in the major leagues sooner rather than later. If Fernando Tatis Jr., Luis Urias, Cal Quantrill and other youngsters join Hunter Renfroe, Manuel Margot, Franchy Cordero and Joey Lucchesi on the roster, this will be an exciting team to watch and follow, regardless of its record.

San Francisco Giants (6-10) — Quietly, Johnny Cueto has bounced back from an off year in 2017 to post a 0.45 ERA in 20 innings over his first three starts. If the old Cueto is back, as he appears to be, the Giants will have one of the league’s best one-two punches once Madison Bumgarner returns from the disabled list.

Seattle Mariners (9-6) — Seattle is off to the solid start it needed if it hopes to sneak into the playoffs with an aging roster. Perhaps most promising of all, Robinson Cano is still swinging like an All-Star, with a .333/.484/.479 line that suggests he hasn’t lost a step at age 35.

St. Louis Cardinals (10-7) — Both the Cardinals’ present and future rests on the arms of the team’s young starting pitchers, so it’s certainly good to see Carlos Martinez (1.75 ERA), Luke Weaver (2.08 ERA) and Jack Flaherty (five innings, one run in his only start) all look sharp in the early-going.

Tampa Bay Rays (4-13) — A lot has gone wrong for Tampa this year, but the Rays can be encouraged by the production they’ve gotten from 25-year-old starter Blake Snell, who has a 2.95 ERA and 26 strikeouts in 21 1/3 innings. If this keeps up, Snell could be a key part of the next competitive Rays team.

Texas Rangers (7-12) — The Rangers have quietly built one of baseball’s best bullpens, with a cadre of impressive arms led by new closer Keone Kela, whose mid-90s fastball and nasty curve make him a dangerous weapon. If the Rangers contend, their relievers will be a big reason why. And if they slide, they’ll have some good arms to offer up come July.

Toronto Blue Jays (11-5) — The Blue Jays appear poised to compete for a playoff spot in what could be the final season of their current window. In what should be a tight wild-card race, this hot start is exactly what they needed.

Washington Nationals (9-9) — The Nationals’ fanbase panicked after a sub-.500 start, but following two straight wins over the Mets, Bryce Harper and company are only a few games back in the division, with a greater-than-80-percent chance to make the playoffs, per FanGraphs. In all likelihood, a whole bunch of worrying will wind up having been for nothing.