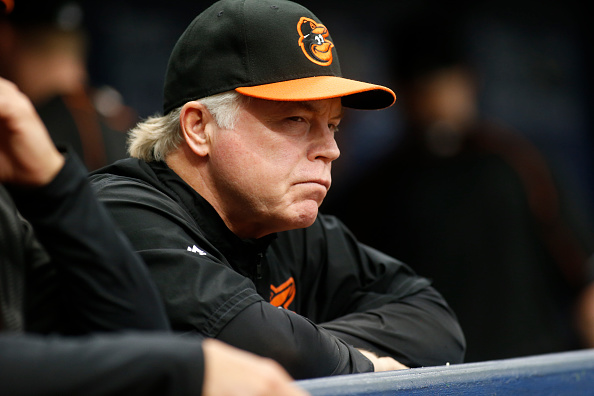 Cleveland Indians reliever Andrew Miller has his former manager’s back.

Buck Showalter has been the subject of widespread criticism following the curious decision to keep AL Cy Young candidate Zach Britton in the bullpen during the AL Wild Card against the Toronto Blue Jays on Tuesday. The Baltimore Orioles skipper used six different relievers during the O’s 5-2 loss in 11 innings, none of whom were Britton.

Miller, who pitched 23 games with Baltimore in 2014, had nothing but praise for Showalter’s bullpen management.

“He’s getting buried right now, but I tell people all the time how good he was,” Miller told ESPN.com. “That’s his reputation. It’s not just me that’s out there saying it. Today might not be the day to do it, but if you polled front-office guys who are out there, I think in general he would be as well-regarded as anybody at that particular skill.”

Showalter’s bullpen management proved costly, but Miller said if Jimenez would have escaped the inning unharmed, his former manager would have looked like a genius.

“I’m as surprised as anybody Britton didn’t find his way into that game,” Miller said. “But even with the earlier moves, O’Day and Brach did such a good job, it almost looked like, ‘Buck knows what he’s doing. He’s got something going on.’ It just backfired. If it worked out, everybody would have said he was a genius and had it all figured out. That’s just the way it goes.”

Nobody is questioning Showalter’s track record as an in-game bullpen manager, so Miller’s praise isn’t unfounded. But, that doesn’t mean keeping Britton on the bench is defensible. Even the best managers make bad decisions – unfortunately for Showalter, his decision to keep Britton planted in the bullpen cost him his season.