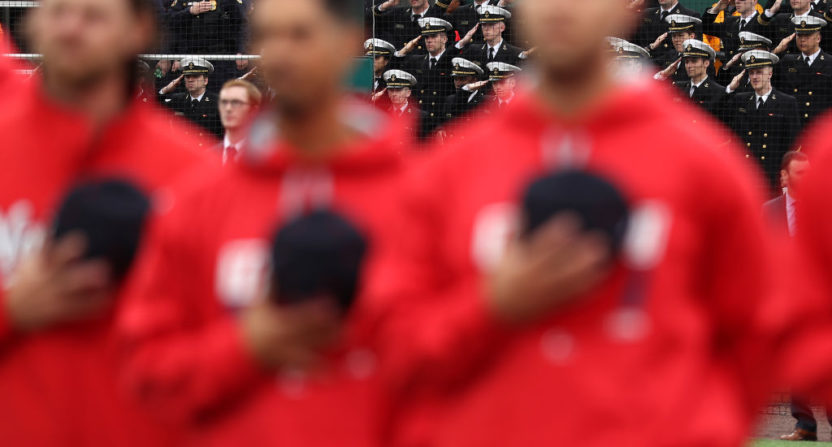 Last April, the Washington Nationals played the Boston Red Sox in front of 800 uniformed midshipmen at Max Bishop Stadium in Annapolis, Maryland. It was the first ever Naval Academy Baseball Classic, and it will reportedly be the last.

According to the Washington Post, the Naval Academy Baseball Classic will be scrapped in 2018 due to the never-ending territorial dispute between the Nationals and the Baltimore Orioles. Technically, Annapolis is in Orioles “territory,” meaning Baltimore has to sign off on letting the Nats play there. Last year, the Orioles gave their rivals a pass. This year, they put their foot down.

“[The Nationals] wanted to have a multiyear commitment but, because it was an agreement made in another club’s territory, it was then agreed that they could do the one year, but beyond that, that is really something that is in the Orioles’ territory,” an MLB official said.

“Ultimately it landed at our office that there’s an issue with a club doing something in another club’s territory and we had to resolve it,” the MLB official continued.

The Orioles-Nationals dispute has been famously messy, with the teams feuding over revenue from the television network MASN ever since Washington got a team in 2005. You might think the organizations could put aside their differences for the sake of a game meant to celebrate the American military, but apparently not.

Of course, the end of the short-lived Naval Academy Baseball Classic doesn’t necessarily spell the end of military-themed baseball games. In July 2016, the Braves and Marlins played at Fort Bragg, in the first ever game at an active military base, and the success of that game could inspire others. And given the Nationals’ commitment to honoring the military in a variety of ways throughout the season, they will likely come up with something else — something the Orioles don’t have to sign off on.