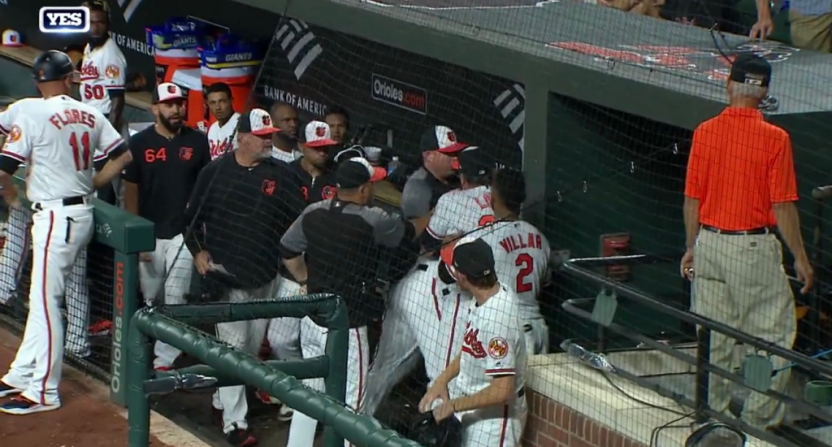 Checking in on the Baltimore Orioles, and yep- things are still a mess.

On Wednesday night, the Orioles got throttled 14-2 by the New York Yankees, but that wasn’t even the most embarrassing part of the game for Baltimore.

In the fifth inning, veteran first baseman Chris Davis was removed from the game after an altercation in the Orioles’ dugout. It appears Davis went after first-year manager Brandon Hyde before being restrained by teammate Mark Trumbo and hitting coach Don Long.

Chris Davis has to be held back from going after Orioles' manager Brandon Hyde #mlb pic.twitter.com/Kn6wEfNcZb

Going out on a limb here… someone said something about Chris Davis’ EMBARRASSING contract pic.twitter.com/lBJi8MZgiQ

Here's what the MASN cameras caught of the Chris Davis-Brandon Hyde interaction:

Appears Hyde said something Davis didn't appreciate, then Davis had to be held back by hitting coach Don Long and Mark Trumbo. pic.twitter.com/4GTaePor2Y

When a team is 38-76, some drama and in-house feuding is inevitable. But when a veteran player is trying to fight the manager, things are especially problematic.

Davis is having his second consecutive brutal season (he’s been worth about -4 WAR per both Baseball Reference and FanGraphs over that time), with a .182/.269/.320 slash line, and took a humiliating 0-for-54 streak to the plate into mid-April. That’s while he still has another three years remaining on a seven-year, $161 million contract. So it’s very easy to see how his frustration could boil over, but… he probably shouldn’t be trying to fight his manager.