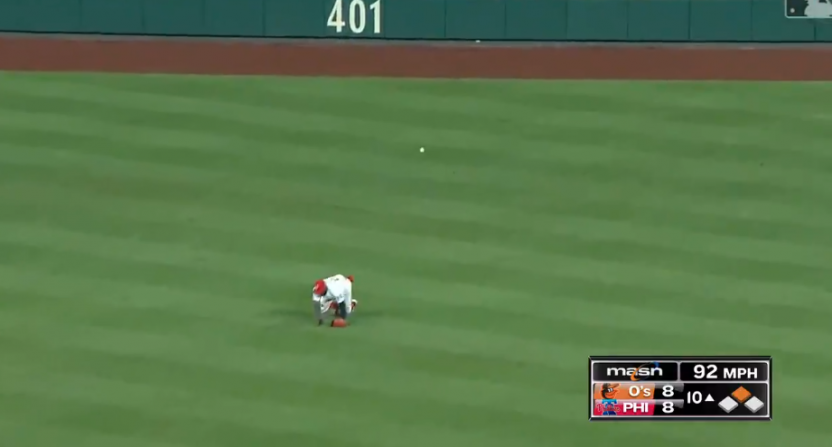 The Baltimore Orioles appeared to be MLB’s worst team entering the 2020 season, but they find themselves with a winning record 25% of the way through this 60-game format. The Orioles improved to 8-7 with a 10-9 win over the Philadelphia Phillies on Tuesday night, and got some assistance from the Phillies’ defense and bullpen in the victory.

Baltimore took an 8-6 lead in the ninth inning after the Phillies were unable to catch a routine pop-up by the pitcher’s mound, resulting in a two-run “single.”

“I GOT IT! I GOT IT!” – me to my boss asking if I got the highlight pic.twitter.com/j8q7wiNXDp

The Phillies scored two runs to tie the game 8-8 in the bottom of the ninth, but proceeded to embarrass themselves again on the defensive side in the 10th inning. Baltimore’s Austin Hays hit a line drive into center field that looked like either an out or single off the bat. However, Philadelphia center fielder Roman Quinn tried to make a diving catch, and whiffed. Hays came all the way around for a two-run inside-the-park homer.

An inside-the-parker for the lead!

This game is wild. 🤯 pic.twitter.com/faI37Jwsu0

That certainly looks *a lot* like the inside-the-park home run the Detroit Tigers hit against the Chicago White Sox on Monday.

While it turned into an embarrassing play for Quinn, his decision to go all-out for the catch is understandable. Thanks to the new extra-inning rule, there’s a runner at second to start the inning, and Quinn wanted to do everything possible to prevent that run from scoring. A single in that situation could’ve been the go-ahead hit, or at the very least would’ve given the Orioles first-and-third with no outs. So, he went for the catch, and came up empty. Had he known that the Phillies would score one run in the bottom of the 10th, maybe he would’ve played it safer.

The Phillies’ relievers didn’t get any help in this one, but their performance has been a complete disaster this season. Philadelphia’s bullpen currently has an MLB-worst 10.19 ERA in 35 1/3 innings pitched.