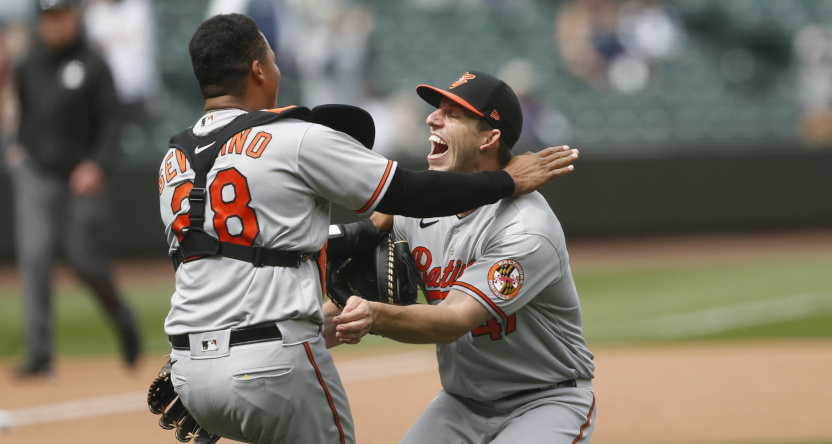 The Baltimore Orioles’ first no-hitter from an individual pitcher since Jim Palmer in 1969 came from John Means Wednesday in a 6-0 win over the Seattle Mariners. It was the team’s 10th no-hitter overall (six as the Orioles, most recently a combined no-hitter in 1991, and four before that as the St. Louis Browns), and the third MLB no-hitter this season.

Means faced the minimum 27 batters, striking out 12 and walking none, but he didn’t quite record a perfect game. In the third inning, Means struck out Sam Haggerty, but that third-strike pitch was wild and got away from catcher Pedro Severino, and Haggerty was able to reach first on the dropped third strike rule before Severino recovered. Haggerty was  quickly thrown out trying to steal second, though, which helped keep the batters-faced count for Means (seen above celebrating with Severino) at 27. Here’s the dropped third strike play, via Connor Newcomb of the Locked On Orioles podcast:

This is the play that stood between John Means and a perfect game pic.twitter.com/3aq9oouma1

Here’s more on Means’ feat from Tim Booth of The Associated Press:

John Means threw the major leagues’ third no-hitter this season and came within a wild pitch on a third strike of a perfect game, pitching the Baltimore Orioles over the Seattle Mariners 6-0 Wednesday.

…Means threw 79 strikes among 113 pitches, including first-pitch strikes to 26 of 27 batters. When Seattle did make contact against the 28-year-old left-hander, it was weak and there were no threats to fall in for a hit.