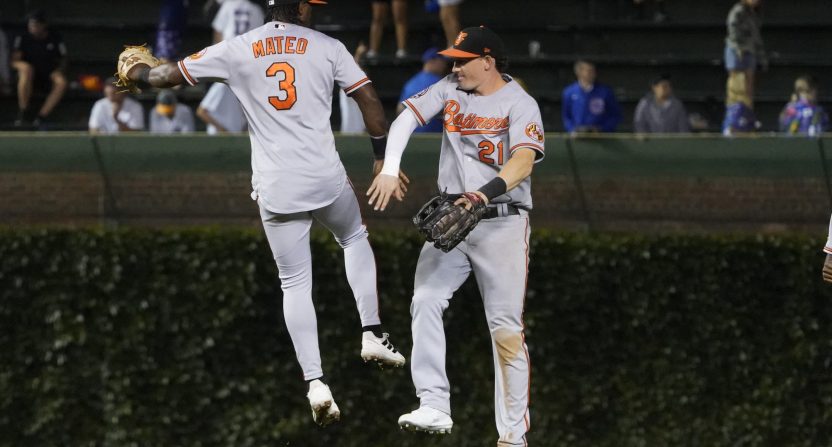 The Baltimore Orioles were tied for the worst record (52-110) in MLB in 2021. The Seattle Mariners have the longest playoff drought (2001) in North American team sports.

And now they each have 10-game winning streaks.

On Wednesday night, the Orioles took down the Chicago Cubs 7-1, and the Mariners swept a doubleheader against the Washington Nationals with 6-4 and 2-1 victories.

While the Mariners last made the postseason in 2021, they were at least a good team as recently as last season, when they went 90-72. And maybe this is the season they finally get back to the playoffs.

Seattle is now 47-42, which has them in a three-way tie with the Toronto Blue Jays and Boston Red Sox for the second and third AL Wild Card slots (the Tampa Bay Rays have a 1.5-game lead for the first Wild Card slot). FanGraphs currently gives the Mariners a 50.7% chance to make the playoffs.

The Mariners’ 10-game winning streak is tied for the second-highest in franchise history. The top mark is a 15-game streak, which Seattle achieved in that 2001 playoff season; the Mariners tied the MLB record with 116 wins that season.

Next up, the Orioles face a very difficult challenge in Tampa Bay against the Rays (48-40) for a three-game series, while the Mariners have a more winnable opportunity at the Texas Rangers (41-45).

The baseball world has had a lot to say about these winning streaks, and here’s a peek at some of the reaction on Twitter:

Since Adley Rutschman debuted May 21, the Orioles are 29-20. An identical record to the Mets' over that span and better than the Padres, Brewers, Cardinals, Phillies, Jays, Rays.

The Orioles started the season with the lowest payroll in the MLB. They've now won 10 consecutive games.

They are the first team since at least 1990 to win 10 straight games in a season despite entering Opening Day with the league's lowest payroll. pic.twitter.com/ynITNQbF9p

Where there's always another beautiful story there to be written.

What these @Mariners have done in the last 25 days to turn their season around, has been a lot of fun to watch🔥🔥#3rdwildcard #seausrise #booneapproved @Softykjr @dickfain

The players continue to come through & have won 7 consecutive series. The fans have stuck w/you through 21 tough years. Please add payroll/talent at the trading deadline & get this team to the playoffs. The players deserve it & so do the fans.

Seattle Mariners are 13-2 since the brawl.

Julio Rodríguez is the 5th player with 90 hits and 20 stolen bases before the All-Star Break in his first season since the All-Star Game was first introduced in 1933.

He's the first to do this since fellow Mariner Ichiro Suzuki in 2001. pic.twitter.com/IX4DuoubzM