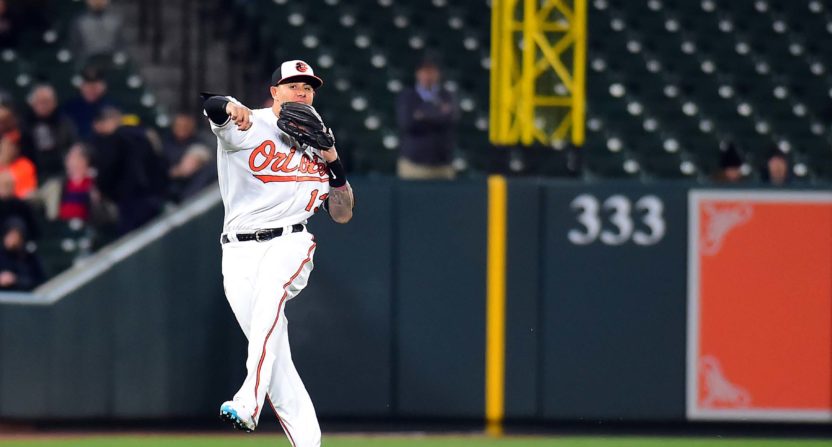 Baltimore Orioles star shortstop/third baseman Manny Machado was in trade rumors all offseason, to the point where we even had a roundtable asking where he’d be playing on Opening Day.

Machado was in trade rumors for good reason. The 25-year-old will be a free agent this upcoming offseason, and it’s quite unlikely that his upcoming $300 million+ contract will be with the Orioles. So it made all the sense in the world for the team to trade Machado over the winter. He’s probably signing elsewhere after the 2018 season, and the Orioles weren’t looking like a contender on paper entering the season. A full season of Machado would’ve likely brought back a tremendous haul of prospects in a trade, to kickstart a Baltimore rebuild.

But the Orioles chose to keep Machado and try to make one more run with him in 2018. And just 19 games into their season, the 5-14 Orioles are already 11.5 games back in the AL East. (The Red Sox are 16-2.) The AL Wild Card race doesn’t look much more promising for Baltimore; they’re 7.5 games behind two teams and have 10 teams ahead of them in the race.

If you’re wondering if maybe that’s just an early-season thing and the computers think the Orioles’ roster will turn it around, FanGraphs currently projects the Orioles to win 69.5 games and gives them a 0.1% chance to make the playoffs (and 0.0% chance to win the AL East). You never know in baseball, but the 2018 Orioles making the playoffs — or even so much as seriously contending for the playoffs — would seem to be a miracle at this point.

Manny Machado launched his 3rd homer of the year in the 3rd. #Birdland pic.twitter.com/NhbACoNqVV

After a down 2017 season (in which he was still a very good baseball player), Machado looks much more like the 6+ WAR guy he was in 2015 and 2016. Machado has a .338/.414/.623 slash line and 1.1 WAR (eighth-best for position players) according to FanGraphs. And that’s all while playing shortstop exclusively, after he won two Gold Gloves at third base. He’s shown to be capable at shortstop still, and we know he’s an elite third baseman at the very least.

Needless to say, just about every contender would be thrilled to add Machado to their team.

If the Orioles were to seriously entertain trade offers immediately, you’d have to think the offers would be pretty massive. A contender that’s confident in their chances to play into October — after adding Machado, at least — could tell themselves that trading for Machado right now would essentially be getting a full season out of him. On paper, he’s likely adding four to five wins to the team the rest of the way and could be a series-changing talent in the playoffs.

Additionally, that team would get their foot in the door with Machado for potential contract talks. If he goes to the postseason with that team and develops a positive relationship with them, that would surely boost their chances to sign him.

So there’s really no sense in the Orioles waiting until July to at least intently shop and listen on Machado. They need to accept the reality of their situation and do the best to maximize it. The offers they’d get today could be much better than the offers they’d get in late July, since the suitor would get Machado for three extra months. There are also more teams in the contention mix now than there will be in July, so maybe one of these fringe teams (like the Phillies, a team that is expected to target him next winter anyway) would be interested in a deal soon and increase the bidding that may not be there in July.

The bottom line is the reasons to trade him far outweigh the reasons to not trade him. And the argument that “keeping him would help the chances he’d sign a long contract with Baltimore” doesn’t really work here. He surely understands the Orioles’ situation and he’d surely be fine with going to a team with a chance at a championship for the rest of this season. It’s not like the relationship would be destroyed or that there’s a rule they couldn’t sign Machado next offseason if they really wanted to.

But the reality is that the Orioles are unlikely to be willing to pay up for him, and he’d probably rather go to a contender if money is equal anyway. The sooner the Orioles accept this, the better, and it will accelerate their much-needed rebuild.