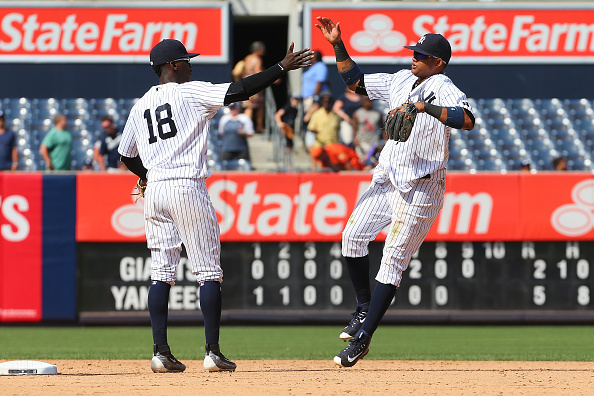 As of Friday, the New York Yankees’ regular shortstop leads the major leagues with a 17-game hitting streak. The Yankees’ second baseman ranks second in the American League with 85 hits.

But the Yankees’ rookie right fielder is hitting monumental and historical home runs. He’s causing baseball analysts’ heads to spin. While fanatics pick up their dropped jaws, the rest of the Yankee lineup–namely its middle infield–is quietly putting in work as well.

After suffering a shoulder injury in the World Baseball Classic, shortstop Didi Gregorius didn’t join the Yankees until April 28. He went 2-for-5 with a double and an RBI in his first game of the season, a 14-11 mashing over the Orioles. Gregorius has been relentless since and is a big reason why the Yankees are 38-26 and in first place in the AL East.

The Yankees’ shortstop has hit .333 with six homers and 25 RBIs with 43 games under his belt. He’s consistent at the dish, reflexively fluid on the dirt. At age 27, he is having a career year. Yet, he has received sparse attention.

Gregorius, a Netherlands native, isn’t surprised by the lacking limelight.

“I have always been under the radar my entire career, so it doesn’t matter for me,’’ Gregorius said, according to the New York Post. “I’m just there to help the team win, and I take it one day at a time.’’

Righties, lefties, it’s no difference who’s on the hill for the left-handed hitter. Gregorius is clubbing a .357 BA against southpaws and has crushed five of his six homers against righties.

His partner in the middle infield received love early in the season, but has since faded from the media’s watchful eye.

Starlin Castro was a key component on the Chicago Cubs before being traded away to New York in 2016. The second baseman transitioned to the Yankees fairly well, capping his debut season on a .270 BA with 70 RBIs and 21 homers.

Only midway into June, Castro is quickly catching up to his 2016 numbers. Yankees manager Joe Girardi has the 28-year-old batting cleanup, boosting his RBI count to 42. Castro is hitting .328/.367/.525, ranks second in the AL with 50 runs and is waiting to pounce on Aaron Judge’s top spot in most batting categories.

Castro has proven he’s unfazed in clutch situations. The second baseman has a .587 slugging percentage with runners on base. Ten of his 12 home runs came with runners on, six of those dingers with runners in scoring position.

Defensively, Castro finally looks comfortable at second base. He has just five errors in 63 games and not a single blunder since May 29 at Baltimore. Yankees fans no longer pause when a grounder comes rolling toward second and are instead reassured by his dependability.

Gregorius and Castro have combined for 67 RBIs and 83 runs while both batting above .325. With the All-Star game less than a month away, fans can expect to see the Yankees’ middle infield secure its spot in Miami.