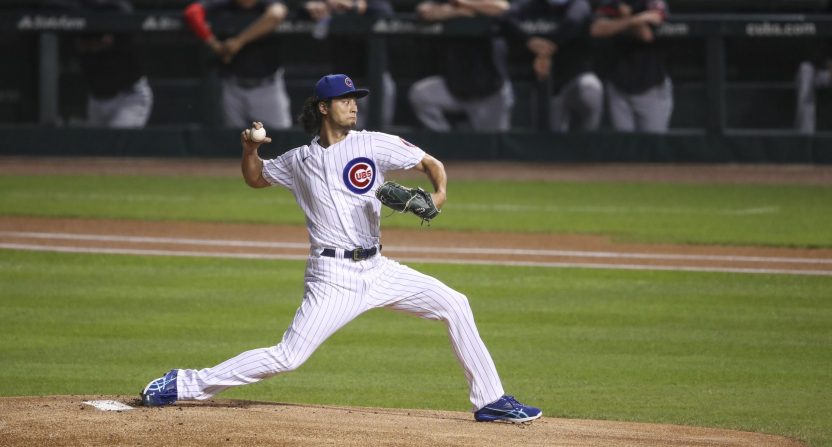 One day after trading for 2018 AL Cy Young Award winner Blake Snell, general manager A.J. Preller and the San Diego Padres have reportedly traded for another ace. Several reporters confirm that the Padres and Chicago Cubs have agreed to a trade that will send starting pitcher Yu Darvish and catcher Victor Caratini to the Padres, in exchange for starting pitcher Zach Davies and four prospects.

Sources confirm to @dennistlin, @PJ_Mooney and me that the full deal is Yu Darvish and Victor Caratini going to the Padres and the Cubs receiving Zach Davies and prospects Reginald Preciado, Owen Caissie, Yeison Santana, Ismael Mena

Darvish deal is agreed to pending medical records. Could be finalized by tomorrow.

Additionally, the Padres acquired Darvish’s personal catcher in Caratini, a 27-year-old who’s made strides as a backstop after being viewed as a bat-first catcher out of the minors. He’s put together a .250/327/.372 slash line at the plate in the majors, and is a really solid No. 2 catcher (who can also handle first base).

The Padres were able to acquire Darvish and Snell while keeping six of their top seven prospects, including the highly regarded MacKenzie Gore, CJ Abrams, and Luis Campusano.

The Padres acquired Blake Snell and Yu Darvish while keeping six of their top seven prospects entering the day, all of whom will likely be on the 2021 @BaseballAmerica Top 100.

In Davies, the Cubs get a soft-tossing but productive starting pitcher who had a sterling 2.73 ERA in 2020, and has a 3.79 ERA in 683 2/3 innings. But the right-hander is only under contract for the 2021 season, at $8.5 million. The Cubs’ rotation is now Kyle Hendricks, Alec Mills, Davies, maybe Adbert Alzolay, and who the hell knows what else.

And the four prospects — Reggie Preciado (17), Ismael Mena (18), Yeison Santana (20, and Owen Caissie (18) — are talented, but they’re basically lottery tickets. Only Santana has even played in a minor league game, which was in Rookie ball.

All four prospects are very talented young players with a lot of potential, but only Santana has played a professional game.

Keep in mind these players would have ranked higher in most other systems and were in the 15-20 range for the Padres to the club's prospect depth. https://t.co/P0EohnxVuk

So, to not come away with a clear-cut top prospect for an ace that still has three years left on a contract is a pretty awful look for the Cubs (especially as a big-market franchise in an extremely winnable division), who are clearly in salary-dump and retool mode.

This is what a salary dump in a pandemic looks like. The Cubs aimed to transfer debt.

This is just not a trade you make as an organization if you’re truly all that concerned about wins and losses in the upcoming season. And we should assume that Kris Bryant, Javy Baez, Willson Contreras, and just about any other Cubs player is very available between now and the trade deadline (and if this trade is any indication, it may not take very good prospects to acquire those players). So much for not tearing anything down.

"I don't think anybody's tearing anything down."
–Tom Ricketts, Nov. 23

The Padres, on the other hand, are *definitely* trying to win, and they’re a legitimate World Series contender now. Yes, playing in the same division as the defending champion Los Angeles Dodgers is brutal, and the Dodgers will still be division favorites until proven otherwise. But the Padres are a real threat and the NL Wild Card favorites at the very least.

San Diego has a loaded roster, featuring an exciting offense led by Fernando Tatis Jr. and Manny Machado, and now an extremely dangerous starting rotation. Darvish and Snell join nasty young right-handers Dinelson Lamet and Chris Paddack in the rotation, with the aforementioned prospect Gore — one of the top prospects in all of baseball — a tremendous left-handed pitching talent that could also be part of the rotation in 2021. And in 2022, Mike Clevinger will be a part of things. Clevinger is yet another ace-esque arm that the Padres acquired in August, but he underwent Tommy John surgery in November (which surely led to Preller being more aggressive for Snell and Darvish).

As I was saying:

Gore may be the best pitching prospect in baseball and doesn't have a clear spot. https://t.co/FOcrNAGkd4

Preller isn’t screwing around. He sees a team ready to win now and is being extremely aggressive to go for it. That should be applauded, especially when organizations like the Cubs don’t even seem to be trying right now.