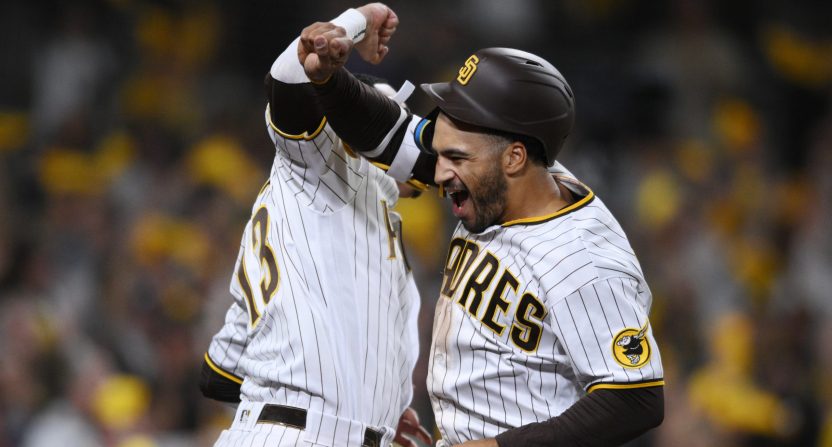 The San Diego Padres are one win away from an NLDS series victory over the Los Angeles Dodgers, who entered the MLB postseason as World Series title favorites.

The Padres held off the Dodgers 2-1 in Game 3 of the NLDS in front of an electric crowd at Petco Park. Along with winning the game 2-1, the Padres took a 2-1 series lead in the best-of-five NLDS.

It was the first postseason baseball game in San Diego with fans in the stadium since 2006.

And for the first time since 2006, fans are back in Petco Park for @Padres #Postseason Baseball! 😤

The Padres took a 1-0 lead on a Jake Cronenworth RBI single with two outs in the bottom of the first inning.

Jake Cronenworth with an RBI single to give the Padres an early 1-0 lead over the Dodgers in Game 3!

Trent Grisham continued his hot stretch by crushing a home run in the bottom of the fourth inning. Grisham has an MLB-best three home runs already this postseason.

It’s been a rollercoaster ride for Josh Hader after San Diego acquired the closer at the trade deadline in a deal with the Milwaukee Brewers, but he was nasty in Game 3, consistently firing 99-100 mph fastballs. He blew a 99 mph fastball past Trayce Thompson to close out the San Diego victory.

The Padres take down the Dodgers in Game 3 to take a 2-1 series lead in the NLDS! ⚾️ pic.twitter.com/DvX3fUsmEo

The five hardest thrown pitches of Josh Hader's career have come in this NLDS.

Game 4 is on Saturday night at Petco Park, with Joe Musgrove starting for San Diego and Tyler Anderson starting for Los Angeles. The Padres want to do everything in their power to end the series in Game 4 instead of needing to win a Game 5 on Sunday in Los Angeles.

If the Padres win the series, they will advance to the NLCS for the first time since 1998.

Just about two and a half decades since the Padres have celebrated a postseason win in front of their fans pic.twitter.com/N93hsLqLCr

Here’s a look at how the baseball world is reacting to the Padres’ Game 3 win over the Dodgers:

Riding a lights-out bullpen, the Padres have won consecutive games against the Dodgers for the first time since June 2021. Those were regular-season games, of course. These last two victories have San Diego one win away from advancing to what would be their first NLCS since 1998.

The sellout Petco Park crowd of 45,137 may not sleep tonight. An electric night ends with #Padres beating #Dodgers 2-1 and putting LA on the brink of elimination into Game 4 tomorrow. This place is rocking

The Dodgers and Braves met in the NLCS in each of the last 2 seasons.

Both teams face elimination on Saturday.@MLBNetwork