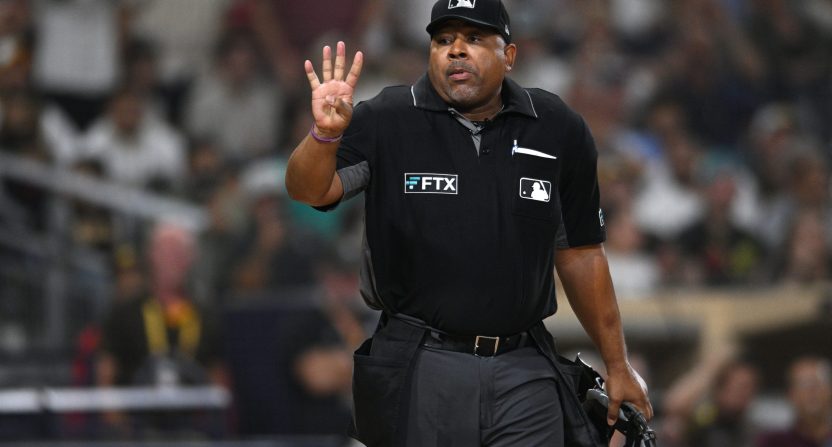 Tuesday’s game between the San Diego Padres and the San Francisco Giants produced one of the funniest umpire moments of the entire season, and it came entirely as an accident.

The moment occurred when Padres’ third baseman Brandon Drury hit a ground ball that looked like it would result in a double play.

However, the Padres challenged the call on the play on Drury beating the relay throw at first base. And first base umpire Adrian Johnson slipped up in a big way when revealing the decision on the challenge.

Johnson (seen above during an Aug. 2 game) didn’t realize that his mic was on when announcing the decision, accidentally swearing on camera for the world at home to see and hear.

“After review, ooh sh*t. After review, the call on the field is overturned, the runner is safe. San Diego retains their challenge.”

This umpire on a hot mic:

This slip-up definitely did not go unnoticed, with many fans at home reacting to the blunder.

It was only a matter of time before an umpirr swore into a hot mic. The moment didn’t disappoint. pic.twitter.com/f5rnlZRCxZ

It was just a matter of time! 🤣 pic.twitter.com/xQenV4IEWJ

This guy is my new favorite ump https://t.co/OpzfuPs8Po

The funniest part of this whole moment is the moment where Johnson realized he accidentally swore, which created some hilarious memes from fans at home watching the blunder.

When you forget to take the chicken out the freezer and hear that door unlock https://t.co/diUPWpvuo1 pic.twitter.com/YNCZF5mpxz

When your mom ask if you did the dishes pic.twitter.com/HYfmh3fEF4

It’s truly shocking that we don’t see this type of hot mic incident more often, considering umpires are relatively new to being mic’d up while doing their job.

Fans at home have been calling for “robot umpires” for quite some time now due to some extremely bad missed calls from umpires this season. But viral hilarious moments like this that everyone enjoys may just change a bit of that narrative for MLB moving forward.