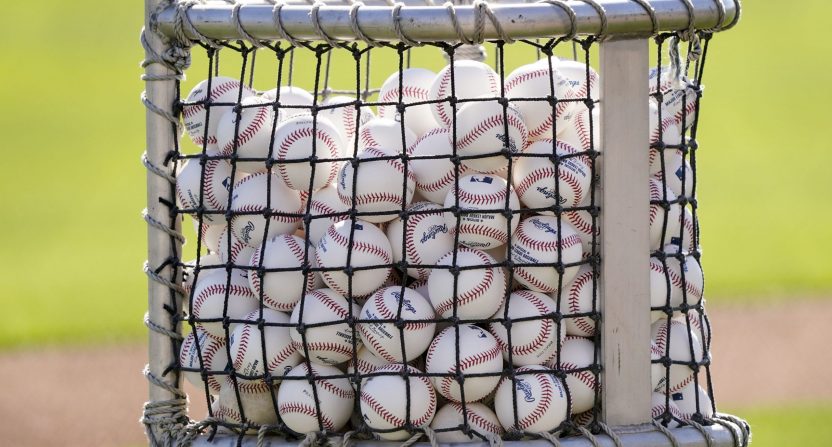 Ken Rosenthal and Eno Sarris of The Athletic recently reported on the de-juicing effort, and included a memo that MLB sent to teams ahead of the 2021 season:

“In an effort to center the ball with the specification range for COR and CCOR, Rawlings produced a number of baseballs from late 2019 through early 2020 that loosened the tension of the first wool winding,” the memo from the office of the commissioner reads, explaining that this change had two effects — reducing the weight of the ball by less than one-tenth of an ounce, and also a slight decrease in the bounciness of the ball as measured by the COR and CCOR.

Rosenthal added, “A study found flyballs traveling over 375 feet will lose one to two feet of batted-ball distance with the new ball. The actual effects, however, will not be known until the balls are used over a large sample of game action.”

And an analyst told The Athletic that the — estimated — change “will reduce home run rates by around five percent.”

Well, are players noticing a difference so far in spring training? San Diego Padres star pitcher Blake Snell (acquired in a trade with the Tampa Bay Rays over the offseason) certainly has.

Snell told the media on Tuesday that “it’s definitely a different ball.”

Padres starter Blake Snell has noticed the laces are thicker in the new baseball, allowing him to dig in his fingers so he can more easily throw breaking balls. He also noticed fly balls not carrying as much as they might have previously.

So, that’s interesting, and further confirms the information that The Athletic reported. The ability for pitchers to “dig in” for better grips on the baseball could be pretty impactful in itself. And the ball carrying a little bit less is especially good news for pitchers after they were recently dealing with arcade-esque elements.

A flyball losing a foot or two may not seem like a huge thing, but over a full season that adds up a lot. That’s going to be the difference between a lot of balls living the yard or not, with many of them likely turning into outs instead. Additionally, some doubles and triples will turn into outs.

We all love watching dingers, but the entire league basically turning into Coors Field was a bit much. After all, hitting home runs is supposed to be a challenge and a very impressive feat, not something you see every other inning. Hopefully the new ball will lead to a product that is more balanced — and seems more legitimate — on the field.