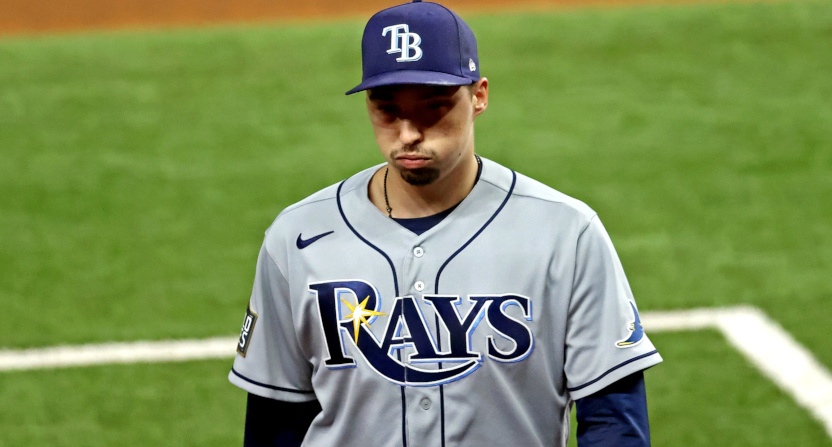 Two months after Tampa Bay Rays’ manager Kevin Cash’s decision to pull Blake Snell in the sixth inning of Game 6 of the World Series (despite a dominant performance to that point) was widely criticized, Snell is no longer with the Rays. As Dennis Lin, Josh Tolentino and Ken Rosenthal of The Athletic reported late Sunday night, Snell (seen above after that Game 6 pull) is heading to the San Diego Padres in return for a prospect package (with the deal pending ahead of review of medical records):

BREAKING: The Padres have an agreement in place to acquire Blake Snell from the Rays, sources tell @JCTSports, @Ken_Rosenthal and me. Luis Patiño, Francisco Mejía, Blake Hunt and Cole Wilcox would head to Tampa. Deal pending review of medical records.

Snell, who turned 28 earlier this month, was selected 52nd overall by the Rays in the 2011 draft and made his MLB debut with them in 2016. He’s gone 42-30 with them since with an ERA of 3.24 and a FanGraphs WAR of 11.6, and he won the American League Cy Young Award in 2018. He’s also signed to a five-year $50-million contract through 2023. So his addition is a big boost for an already-strong San Diego rotation, which, as ESPN’s Jeff Passan noted, might even lead to the Padres (who went 37-23 in the shortened 2020 MLB season and advanced to the National League Division Series) trading some depth for help elsewhere:

Which is also to say: San Diego can get even better using its rotation depth to make some other deals.

Meanwhile, as for the prospects the Rays have acquired, the most notable is Patiño. He was ranked as the #10 prospect at FanGraphs and the #16 prospect at Baseball America in 2020, and who made his MLB debut this year, posting a 5.19 ERA and 21:14 K:BB over 17.1 innings during 11 appearances (one start). But the other prospects don’t look as interesting; Meija is a former top-20 prospect but hasn’t shown a ton of success so far, Wilcox has been a decent reliever, and Hunt is a younger catching prospect.

Maybe this swap will pay off for Tampa Bay down the road if one or more of those players becomes a huge star. But at the moment, it sure looks like yet another case of that organization trading proven stars for prospects, something they’ve done a lot over the years (including with the Tommy Pham trade Snell criticized last year; Pham will now be Snell’s teammate in San Diego). And in this case, they’re doing so with a proven star who was already under a reasonable contract (compare with what other top MLB pitchers are making) for several further years, not one set to leave in free agency. And seeing them do so after they came so close to winning a World Series is particularly interesting; they got near the pinnacle, but they appear to be hitting reset yet again in pursuit of an even-cheaper payroll. They already had the third-lowest payroll in baseball ($28.3 million, adjusted for the shortened season) this year, and that payroll looks to decline further after this trade.