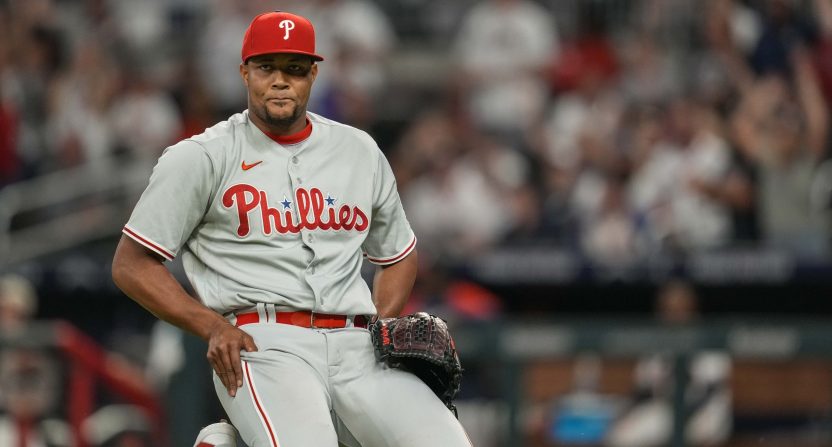 Coming into the season, it was obvious that the Philadelphia Phillies were not making defense a priority. The poor defense had already burned the Phillies on multiple occasions in 2022 and on Tuesday, did so again.

While we tend to think of bad defense as letting the pitcher down, on Tuesday it was Philadelphia’s pitcher, Jeurys Familia, doing the damage himself.

The Phillies were in the 10th inning of their game against the San Francisco Giants, who started the inning with an automatic runner on second base. Joc Pederson led the inning off for San Francisco and hit a sharp grounder to first. Philadelphia got a great defensive play from Rhys Hoskins, which was completely negated by an abysmal effort from Familia.

You've got to be joking… pic.twitter.com/H5WVf5WHEV

Familia could not have messed this play up any worse. While Hoskins fielded the ball deep behind first, Pederson is not particularly fast. If Familia broke to cover first base on contact, Pederson is probably thrown out. And as strange as this sounds, once he forgot to break, Familia would have been better off just staying put. By the time he did get to first, Pederson was well ahead of him. Familia’s late break to cover first only opened the door for another mistake — which happened.

If Familia had caught the throw from Hoskins, San Francisco would have had runners on first and third with nobody out. Not ideal for Philadelphia, but Familia still would have had a chance to pitch out of it. But by dropping the ball and running several feet past it, Familia gave his former teammate, Wilmer Flores, a chance to break home from third. And even though Flores is not known for his speed, he scored easily.

Baseball fans have been quick to criticize the Phillies for their defensive lapses this season and didn’t let this mistake go.

The Phillies are as bad on defense as everyone thought that they would be except for the Phillies’ front office https://t.co/svk1TaSaWY

The 2022 Phillies are legit cursed. Can't even watch, it's too painful https://t.co/UaORGLx28o

This could very well be the worst defensive team in the history of the game. https://t.co/PRymCGMaWR

You know, the more I watch this, the funnier it gets https://t.co/6SIP97I2DV

The issues didn’t stop there for Familia. He dealt with control issues and couldn’t manage to keep his shoe tied. Despite that, he did manage to limit the damage, holding the Giants to only one run. The Phillies took advantage of that the following inning when a good break allowed them to tie the game.

Unfortunately for Philadelphia, that’s where the good news stopped. San Francisco quickly got the lead back in the 11th inning, then padded it on a two-run home run from Pederson. That gave the Giants a 7-4 lead and while the Phillies loaded the bases in the bottom of the 11th, they couldn’t score.