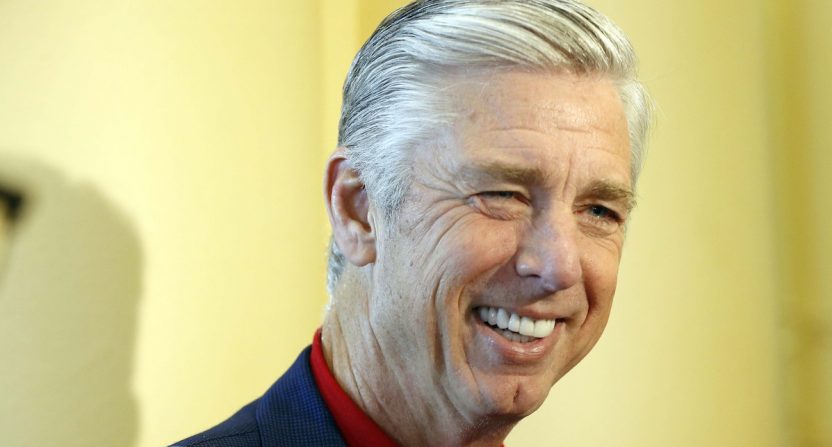 So much for Nashville. Dave Dombrowski apparently wanted to head back to the East Coast.

The Philadelphia Phillies named Dombrowski as their new president of baseball operations Thursday. The news was first reported by The Athletic’s Jayson Stark and officially announced at a Friday news conference.

For the Phillies, it’s something of a surprising move after general manager Matt Klentak stepped down and was reassigned in October. The preference throughout Major League Baseball has been to go with younger evaluators and executives who have a background in data analytics and advanced metrics. Hiring a veteran executive like Dombrowski is obviously going in the opposite direction.

That’s not to say Dombrowski isn’t enormously accomplished, however.

During his last front-office stint, the Boston Red Sox won the 2018 World Series. He also won a championship with the Miami (then Florida) Marlins, four years after the franchise joined MLB as an expansion club. And in 14 years with the Detroit Tigers, his teams played in two World Series, won four AL Central titles, and one wild-card playoff bid.

This wouldn’t be the first time the Phillies went against popular trends in baseball, either. Most clubs have recently hired first-time managers. Plenty of current skippers were bench coaches for other teams. Some worked in front offices. Several were active major leaguers just a few years ago, viewed as being able to communicate well with current players.

Yet the Phillies hired a veteran with 11 years of managerial experience (and a World Series title) in Joe Girardi. To be fair, that was probably a natural reflex after taking a chance on the kind of manager referenced above. Gabe Kapler managed a bit in the minors but jumped into the Phillies’ dugout from the Dodgers’ front office, where he was the team’s director of player development.

Dombrowski going to Philadelphia could also be viewed as a surprise. In July, he was named as part of a leadership group focused on bringing an MLB team to Nashville. (Interestingly, Tony La Russa was involved in that initiative and he’s now back in baseball too. Should we look for Dave Stewart to take a job with an MLB club soon?)

Working to bring a major-league team to Nashville seemed like an ideal next move for Dombrowski. He was fired by the Red Sox less than a year after the team won the World Series, largely for building up a bloated payroll that was too inflexible to make moves needed to improve the roster. (Maybe he was a convenient scapegoat for Boston not re-signing Mookie Betts.)

In Detroit, Dombrowski left behind a front office woefully outdated in analytics in terms of data, manpower, and technology. The Tigers have spent the past five years trying to catch up and may now be at a point many of the best teams in baseball were nearly 10 years ago.

Maybe Dombrowski, 64, wasn’t suited to be a major-league general manager anymore. A reputation for being behind the times has stuck to him ever since, a perception he addressed in his introductory press session with the Philadelphia media.

“I know you get reputations,” said Dombrowski. “When we were in Detroit, over the last few years, we spent the majority of our payroll on the big-league roster. […] We had a very small analytic department, a couple people.

“When I went to Boston, we actually incorporated analytics basically everywhere,” he continued. “When I went there at first, and you can check with people from Boston, the analytics department, which was up front, had really kind of fallen behind, really hadn’t made many adjustments in recent years. Not as many people, hadn’t been advanced in some areas, and we really built that back.”

So if Dombrowski’s to be believed, he’s a big advocate for analytics now. It appears that his experience in Boston taught him the value of combining his background in scouting with a strong advanced data team. And Phillies owner John Middleton has made a significant investment in bolstering that part of the team’s operation.

One important note: Dombrowski could hire a general manager, though he’s typically taken authority over personnel. But a GM with a strong analytics background could make for a powerful combination. And the Phillies may have an ideal candidate already on hand. Director of player information Sam Fuld has interviewed for several MLB managerial openings in recent years and could be a valuable resource to Dombrowski.

Dombrowski says Phillies were among teams to reach out in fall. MacPhail reached out again Sat., told him Middleton wanted to talk.

DD got info from MLB on Mon/Tues that time frame expansion group in Nashville to pitch presentation wasn't going to take place in '21 like hoped.

Dombrowski seemed committed to the Nashville initiative and declined previous overtures from the Phillies. But after learning from MLB that the expansion process will take longer than expected, he decided to move back into a front office. In his view, the Phillies are a “retool, not a rebuild.” And though the team might have to cut some payroll in light of COVID-19 financial losses, Middleton has shown he’ll pay top dollar for players like Bryce Harper and Zack Wheeler.

That’s the kind of setup which has worked well for Dombrowski. Though he’s established a reputation for trading away top prospects for star talent, he broke down and retooled in Miami, Detroit, and Boston. Besides, his trades have yielded the likes of Miguel Cabrera, David Price, and Chris Sale.

When Dombrowski feels the need to be aggressive, he gets the guy he wants. That surely appealed to Middleton and could make the new president of baseball operations a very popular figure in Philadelphia in the years to come.