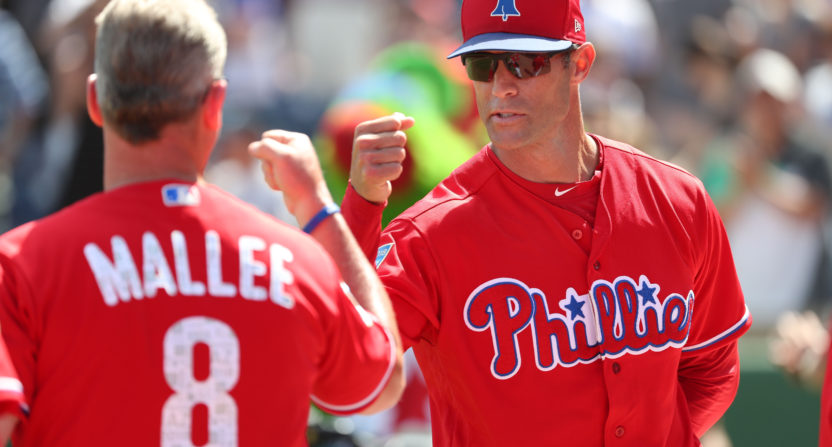 On Sunday, the Philadelphia Phillies scooped up baseball’s final remaining A-list free agent, signing righty Jake Arrieta for $75 million over three seasons. Assuming he passes a physical, Arrieta will now slot alongside Aaron Nola at the top of a Phillies rotation that finished in the top half of the majors in ERA last year and figures to be even better this coming season.

The Arrieta signing, plus other free agents and some rising talent, is enough to get Phillies fans dreaming. With a new ace onboard, can Philadelphia, which finished last in the NL East in 2017, hang around the playoff race in 2018? Can the Phillies at least push .500? Will they be fully ready to contend in 2019?

The first thing to note is that Philadelphia will almost certainly be much improved from last year’s 96-loss fiasco. In addition to Arrieta, they signed Carlos Santana to play first base and enlisted Tommy Hunter and Pat Neskek for their bullpen. Just as importantly, they stand to benefit as young players such as Nola, J.P. Crawford, Scott Kingery, Rhys Hoskins, Nick Williams and Jorge Alfaro improve and claim more playing time.

In the rotation, Arrieta shows signs of decline but figures to be a sturdy and useful starter even in the worst-case scenario. Nola, fresh off a breakout season (3.54 ERA, 3.27 FIP in 168 innings), looks like a potential ace. The rest of the rotation offers more questions than answers, but at least Jared Eickhoff, Vince Velasquez, Nick Pivetta, Ben Lively and Zach Eflin offer some upside. If one or two of those guys over-performs, this group could be solid. Adding Neshek and Hunter to an already-solid bullpen should only help.

Optimists might look at the 2015 Cubs as an analogue for the 2018 Phillies. Coming off a last-place finish, that team was considered a year or two from contention but wound up winning a wild-card berth and reaching the NLCS. If you squint, maybe you can imagine Arrieta as Philadelphia’s Jon Lester and Kingery or Crawford as the team’s Kris Bryant.

Alas, that’s probably not realistic. The Phillies young players are good, but they don’t have quite the star potential as the standouts from that Cubs team. But still, there are other precedents to consider. The 2017 Twins improved from the worst record in baseball to a postseason spot behind talented 20-somethings. The 2013 Pirates surged from 79 to 94 wins to earn their first playoff berth in 20 years as key players came of age. Sometimes young stars figure things out all at once.

And sometimes they don’t. Before the Arrieta signing, Baseball Prospectus’ PECOTA projected the Phillies for 78 wins, a figure that should rise two or three ticks with the former Cy Young winner onboard. FanGraphs forecasts the Phillies for only 78 victories even after adding Arrieta into their calculations. The fact remains that going from 66 wins to 86 is no easy feat. In other words, Philadelphia fans shouldn’t save for playoff tickets just yet.

But with the NL East almost laughably weak, particularly if Mets’ starters again fail to stay on the mound, the Phillies can’t be discounted as a sleeper contender. And even if everything doesn’t quite come together in 2018, Philadelphia has cash to toss around in next offseason’s free-agent bonanza. The Phillies may not be here yet, but they’re sure as hell coming.