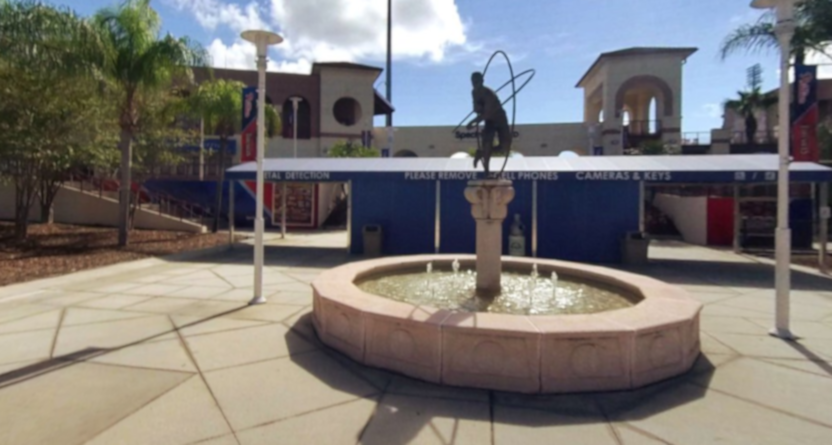 Amidst all the discussion of MLB/MLBPA season resumption negotiations, there’s been a COVID-19 coronavirus outbreak at the Philadelphia Phillies’ training facility in Clearwater, Florida (Spectrum Field, seen above). Jim Salisbury of NBC Sports Philadelphia reported Friday that according to multiple sources, five players who have been working out at the facility and three staffers have tested positive so far, with others awaiting test results. Here’s a statement from the team, which includes that they’ve closed their Clearwater facilities indefinitely “until medical authorities are confident that the virus is under control and our facilities are disinfected”:

Phillies issue a statement regarding 8 positive COVID-19 cases at their spring training complex in Clearwater, Fla.

In addition, the Phillies say 8 staff members have tested negative while 12 staff members and 20 players (both minors and majors) are in process of being tested: pic.twitter.com/g6h8wFvVat

This is the first specifically reported COVID-19 outbreak in MLB, although a MLB letter to the MLBPA Monday obtained by USA Today revealed that “we already know of several 40-man roster players and staff who have tested positive.” It’s unclear if that MLB letter was referencing the Phillies case or other situations. .

None of the people who have tested positive so far have yet been hospitalized, and Salisbury writes that “the virus appears to be under control in all of them.” But there are still plenty of long-term health concerns with COVID-19, so even cases that don’t look bad at the moment can do damage in the long run. Here’s more from Salisbury’s piece on what’s going on with the Phillies:

The Phillies closed their Spectrum Field facility in mid-March when the sporting world shut down because of the COVID-19 crisis. The facility received a deep and thorough cleansing. Players rehabilitating from injury were allowed to continue their recovery work under the supervision of a few of the team’s athletic trainers and staff.

Over the past few weeks, the team allowed several more players to begin working out at the facility. Strict health and safety precautions were taken and group sizes were limited. Still, there was an outbreak.

…“I’m not trying to scare anyone, but this is real and it spreads quickly and easily and people need to know,” said one person who knows some of the Phillies personnel who has tested positive.

As Salisbury notes, this news comes at a time of rising case numbers in Florida in general. The state’s numbers were up to 89,748 total cases and 3,104 deaths Friday. And the players and staffers from the Phillies’ facility weren’t in a specific quarantine bubble, so even the cleaning protocols at the facility may not have helped if they picked it up elsewhere. We’ll see if this impacts the MLB and MLBPA talks on resuming play.