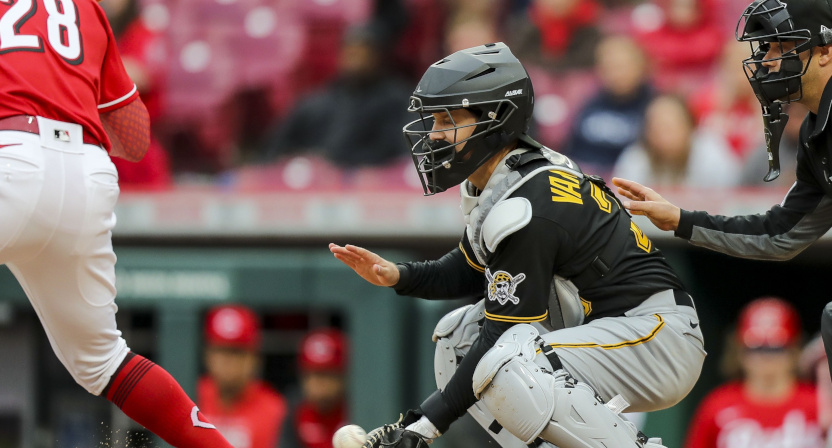 One of the interesting things in sports is what happens with specialized positions when both the starter and the backup go down. That’s what leads to things like emergency backup goalies in the NHL and emergency kickers in the NFL. The latest case of this comes in Major League Baseball with the Pittsburgh Pirates Saturday against the Cincinnati Reds. The team saw starting catcher Roberto Perez leave the game in the eighth inning after he injured his left leg rounding second; normally, that wouldn’t have been a huge problem, but backup Andrew Knapp had already been ejected in the sixth inning for arguing balls and strikes from the dugout. So that led to the team shifting 27-year-old second baseman Josh VanMeter to catcher, a position he hadn’t played since he was 14. Here’s more on what happened next, from Jason Mackey of The Pittsburgh Post-Gazette:

That led to the emergency catcher, VanMeter, catching Wil Crowe in the eighth.

It did not go well.

After a hit batter and two walks to start, Cincinnati catcher Tyler Stephenson doubled into the right-field corner, past a diving Ben Gamel, to score a pair of runs and open the floodgates.

A sacrifice fly stretched the Reds’ lead to 5-2. Then right fielder Tyler Naquin cleared the bases with a three-run double. Second baseman Brandon Drury scored another with a double for good measure. Things got ugly.

Indeed. The Reds won that one 9-2. (The sides are set to play a rematch later Saturday.) And that win is remarkable, considering that Cincinnati is now just 4-22 on the season. (Granted, Pittsburgh’s 10-15, so they’re not the 1927 Yankees either.)  But it’s still fascinating to see a baseball team have to call on an emergency backup catcher like VanMeter (seen at top), especially one who hadn’t played that position in 13 years. And this even led to a funny post-game comment from one of his opponents:

Tyler Stephenson on Josh VanMeter catching: “When I went up to hit, I told him just to take it to arbitration, so he could get paid a little more. When he came up his last at-bat, he was like, ‘Man, my legs are already hurting.’ It was funny.”