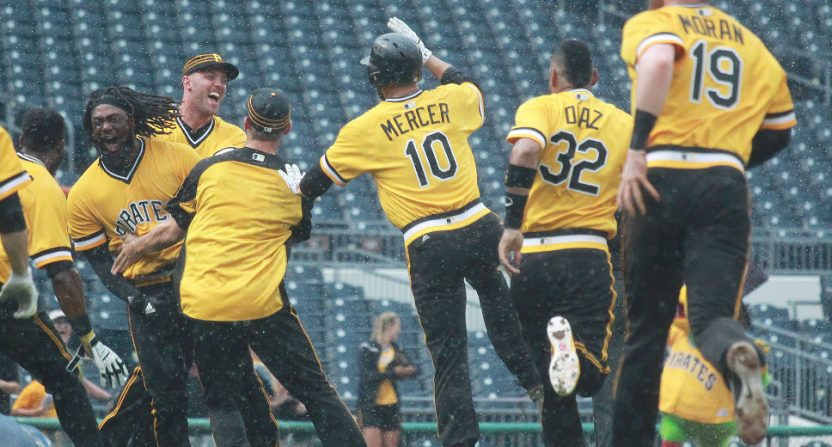 Rainy weather often leads to some weird sports moments, and what the Pittsburgh Pirates did Sunday to complete a five-game sweep of the Milwaukee Brewers certainly qualifies. The Pirates were down 5-3 heading into the ninth, and while they loaded the bases with none out, shortstop Jordy Mercer hit into a double play, scoring one run but leaving them one out from a loss. Pinch-hitter David Freese then connected for a triple to right-field on a 1-2 count, though, driving in Josh Bell to tie the game.

And while Corey Dickerson grounded out to send the game to extra innings, and while the Brewers got a run of their own in the top of the 10th and the Pirates again wound up with two out and only a runner on first (Gregory Polanco, thanks to a single), things got better from there. Milwaukee brought in fresh pitcher Dan Jennings, but Colin Moran then singled to set up Bell’s walk-off double in the pouring rain:

Down a run. Down to their last out. In the pouring rain.

That’s how you close out a 5-game sweep. 👀 #TipOfTheCap pic.twitter.com/MeW9cGAN6z

That’s one that probably doesn’t happen if the weather conditions are better. Bell hit that well, but centerfielder Lorenzo Cain might have had a better read on it in clear conditions and gone back more quickly. And even more importantly, while Polanco scored easily once this ball hit the ground, the Brewers had a great chance to get Moran at the plate and send this one to the 11th. Cain’s throw got there in plenty of time, but catcher Erik Kratz wasn’t able to haul it in. That let Moran score and paved the way for Pittsburgh celebrations, and for complaints from some Brewers’ fans, including (yet again) Kato Kaelin:

MILWAUKEE @Brewers U ARE BEYOND DIARRHEA. I’m DONE. Attanasio uR The WORST OWNER IN @MLB IF U KEEP COUNSELL. STEARNS JUST LEAVE TOWN ur BBALL PICKS OF PLAYERS SUCKS. It’s FN OVER. 5 allstars is the BIGGEST SCAM IN BASEBALL. WILLIAMS, JENNINGS, BARNES, THE LIST GOES ON- ALL SUCK

That might be a little harsh. But being on the wrong end of a five-game sweep is pretty rough, and pretty unusual; most series don’t run that long, and it’s quite rare to see one team win all five games in the ones that do. The last five-game sweep in Major League Baseball saw the New York Yankees take five from the Boston Red Sox in 2006. And the Pirates hadn’t pulled off a five-game sweep since 1996 in San Francisco against the Giants. The 48-49 Pirates are still in fourth in the NL Central, and the 55-43 Brewers are in second (behind the 55-38 Chicago Cubs), so this series doesn’t necessarily make Pittsburgh the better team overall, but they sure had Milwaukee’s number this week. And that sweep, pulled off with a little help from the rain, could have implications for both clubs in the stretch run.