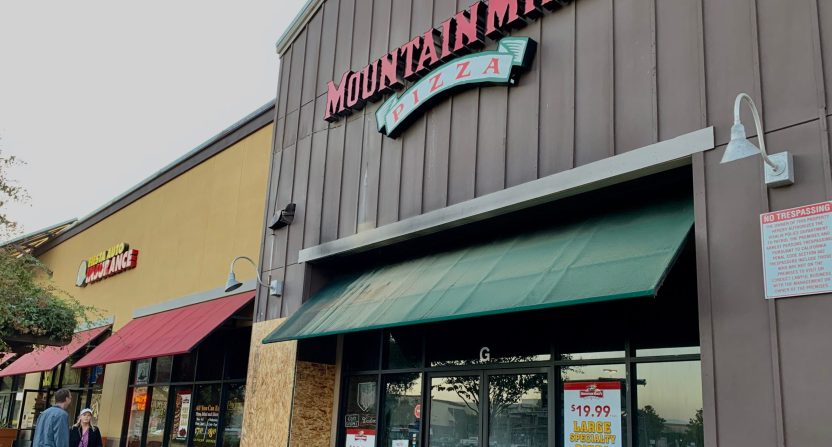 Things got heated during Sunday’s game between the Los Angeles Angels and Seattle Mariners. That included the pizza that was delivered to Jesse Winker after he was ejected.

The game boiled over into a brawl Seattle’s Jesse Winker took a 91.1 mph fastball from LA’s Andrew Wantz off his hip in the top of the second inning. It was the latest in a series of similar moments over the course of the weekend and it was just a matter of time before the benches and bullpens cleared.

Winker was one of eight players and coaches who were ejected from the game and he spent the rest of the afternoon stewing in the clubhouse. That’s when one intrepid fan jumped into action and decided to order a pizza to be delivered to Angel Stadium, specifically to Winker.

I just ordered a pizza for Jesse Winker from @MountainMikes Pizza in Anaheim. You deserve it big guy @Mariners pic.twitter.com/AymUQvQ3r9

Somehow, the Mountain Mike’s Pizza was not only approved, but the delivery driver earned their tip and then some by getting it into Winker’s hands.

IT IS DELIVERED! Tip info coming if he can reply, I’m hesitant to give my own Venmo/Cash App because I’m certain DoorDash has a maximum tip size. pic.twitter.com/qCuQTgV7Ye

And Winker even responded to thank Sofie for the pizza, sharing his appreciation for the kind gesture on such an intense day.

HE GOT THE PIZZA MY FRIENDS MISSION ACCOMPLISHED! pic.twitter.com/7mmV603Uyk

Just in case you’re thinking this is all an elaborate fake-out, the pizza delivery was independently confirmed.

I have confirmed that not only did Jesse Winker get the pizza, he said it was really good. So, there you go, @MountainMikes is on my list next time I'm in Anaheim. Thanks for the tip @sofieballgame https://t.co/Ek7Kc820Cr

Given the wildly successful pizza delivery, Sofia then made sure that delivery driver Simranjeet got his due for going above and beyond, giving other Mariners and MLB fans a chance to add a tip of their own. And then things got sentimental in a way we’re not sure anyone was expecting.

Simranjeet the Legend thanks you all! I am crying right now for what you’ve done for him. pic.twitter.com/xlQ8nLzSJ1

All in all, a pretty good and positive result to come out of a wild brawl. Nice work, Sofie.