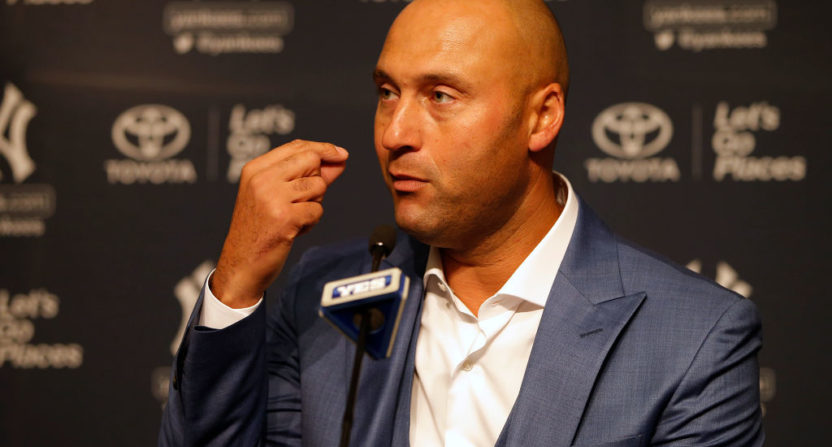 Derek Jeter still has a desire to help buy the Miami Marlins, even if he is becoming less likely to be the winning bidder. Jon Heyman of FanRag Sports reports Jeter remains in contention to buy the Marlins but two other bids seem to have financial resources in their favor.

One bidding group highlighted by Mitt Romney and former ace-pitcher Tom Glavine has been given a bit of a financial boost with the addition of Wayne Rothbaum, and may be the new leading candidate to win the Marlins in what is shaping up to be a three-bidder race. The initial $1.3 billion price tag to acquire the Marlins and their hideous excuse for a baseball stadium may have to be bargained down to $1.1 billion or $1.25 billion according to Heyman, but at that price what difference does $700 million to $2 billion make?

The other major bidder in the running is Miami billionaire Jorge Mas. Per the report from Heyman, Mas has the funds ready to cut a check today if he so desired, and that makes him a strong candidate in the bidding process (Jeter would be a part of an ownership group too, after all). He also just so happens to be a guy who understands the Miami scene better than anyone else in the running.

“Mas is prominent in the Miami community, maybe the most prominent in the Cuban community there. And he has the money,” one anonymous source said to Heyman. “All these other groups are 10 or 15 guys. It can get unruly.”

There is nothing wrong with an ownership group, although putting a face on ownership becomes trickier with so many vested in the ownership pie. Having Mas as the clear face of the front office has its benefits, although Jeffrey Loria is much more interested in just cashing out on the Marlins. Loria being an admirer of Jeter, which has helped Jeter remain a viable candidate even if his bidding group is noticeably shorter on cash than the other bidders. Per Heyman;

Jeter had been thought to be hundreds of millions of dollars short at one point, but word is he has made some progress toward the $1-billion plus needed. It’s hard to know what he’s thinking as the ultra-private Jeter doesn’t appear to have a spokesman. Everyone is referred to his longtime agent Casey Close, who has consistently declined comment.

There is no question that Major League Baseball would love to have Jeter as an owner, but just because he is a Yankees legend does not mean he would be the best owner for the Marlins. And considering Loria is the one who needs to sell the team, odds are even Loria would pass on Jeter to make a few extra bucks.