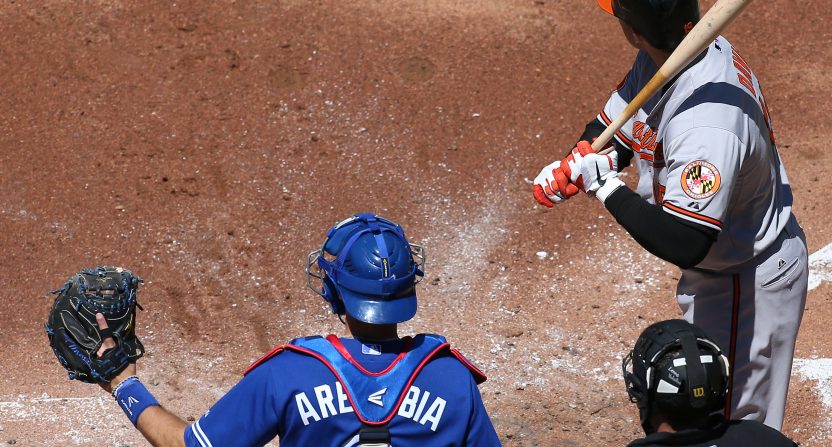 On Tuesday, news broke that MLB had done away with the intentional walk.

As part of its initiative to improve pace-of-game play, Major League Baseball has approved a change to the intentional walk rule, going from the traditional four-pitch walk to a dugout signal, team and union sources told ESPN’s Howard Bryant.

If you’re wondering why, well, the answer is pace of play. How big of an impact will this change make? Let’s head back to that ESPN report:

Getting rid of the old-fashioned intentional walk would eliminate about a minute of dead time per walk. In an age in which intentional walks actually have been declining — there were just 932 all last season (or one every 2.6 games) — that time savings would be minimal.

But MLB saw the practice of lobbing four meaningless pitches as antiquated.

That’s hilarious. The sport has been around for centuries. If they start strip-mining the “antiquated” elements, you’d be left with teams consisting entirely of designated hitters facing teams of defensively shifting specialist relievers at Coors Field.

And as for the actual pace of play issue, well:

Intentional walks took an estimated 1410 minutes in 2016.
That is 35 seconds per game. Is the automatic IBB really gonna fix pace of play?

That estimate was full of numbers, so I trust it implicitly.

But regardless of whether or not this rule change is necessary (it’s not), it’s hard to make an argument that it’s going to fundamentally change the game. Are there fun moments relating to the intentional walk? Sure.

Or on the other end of the spectrum:

Obviously, those moments are fun. And sometimes, things go awry with the pitches themselves, as Jason Kipnis pointed out:

But I’ve scored twice on an overthrow during an intentional walk… https://t.co/cSHhsBQknY

But in the end, those moments represent an incredibly small amount of instances in which it would matter if the pitcher threw four balls or not. And it’s not like it’s an integral component to the sport that those pitches be thrown.

For example, my dad always wondered why a pitcher didn’t just go to his mouth on the rubber four times, resulting in four balls. (Rule 8.02) A reasonable point!

And yet, there apparently existed an entire community of people who refuse to let this specific change occur without mourning.

Here’s Deadspin writing about how it’s a bad idea. And here’s Sporting News. There are plenty more if you want to Google. And hey, even we wrote about it a while back, arguing that removing the thrown pitch element isn’t in the spirit of the rules.

Which might very well be true! But you know what else isn’t in the spirit of the rules?

The intentional walk itself!

It’s the equivalent of hack-a-Shaq, in a way. And while the NBA has attempted to discourage that with various rule changes, recognizing that people don’t watch the sport to see key moments taken away from the best players, MLB has instead made it even easier to do just that.

Baseball is never, ever, ever going to be a fast-paced sport. It’s just not going to happen. What makes it fun, though, is that after plenty of build, there can be big, exciting moments. An intentional walk is not that. It worked out as a strategy for the Cubs, but the sport was not better off when Joe Maddon walked Bryce Harper 13 times (four of which were intentional) during a four-game series last May.

Baseball needs those moments to make up for the inevitable in-game slowdowns. Bryce Harper getting sent to first a total of 13 minutes faster would not have improved that series aesthetically. But how do we solve the problem? And could we actually solve two of MLB’s nagging issues at once?

Having given this all of three minutes of thought: why not let a batter refuse a walk? There are probably people who have proposed this already (indeed, there have been), but it would add another strategic element to the game. Taking the walk is almost always the better option, so the change might not be hugely impactful, but no longer can pitchers avoid the best opposing hitters outright.

Plus, you’d get to see players chafe if ordered to accept the walk. Imagine Javy Baez arguing with Joe Maddon that he should be allowed to stand in and hit? This could also apply to an HBP, as well.

MLB has been searching for ways to improve offense (or at least to make it more exciting) for a while now. The true spirit of the walk rule is supposed to be a benefit to the offensive team, not a strategic tool utilized by the defense. This change could fix that, while creating more of the exciting moments that baseball needs.

Because, again, it’s never going to be fast. But it could definitely be more fun.