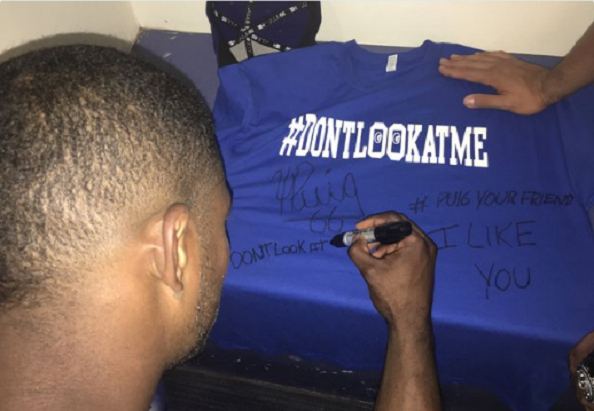 It started with a simple play at first base. Now the Yasiel Puig-Madison Bumgarner fight has turned into a gift-giving situation.

In about 24 hours, a bench-clearing brawl started by Puig and Bumgarner has resulted in a walk-off win for Puig and the Los Angeles Dodgers, a set of t-shirts being made, and Puig sending Bumgarner one of those shirts in an attempt to make a joke out of the situation. Man, has this story changed quickly?

Puig and Bumgarner first made headlines during Monday’s Giants-Dodgers game when they got into it after a play at first base. This led to the benches being cleared and Bumgarner being pulled from the game. Since that initial incident took place, shirts have been made with the phrase ‘don’t look at me’ put across the front (this was the phrase uttered by Bumgarner that basically started the feud).

These shirts quickly made their way around the internet thanks to Puig and teammate Adrian Gonzalez tweeting out pictures of the shirt. Hours later, a reporter from ESPN learned that Puig had signed one of the shirts and sent it to Bumgarner, who was in the visiting clubhouse with San Francisco.

Adding a little fuel to the fire… All in good fun! https://t.co/d2ImfpyuB3 pic.twitter.com/AImnda42n2

Look, I’m all for Puig trying to make amends out of the situation. But he has such a strange reputation, and things got so heated with Bumgarner on Monday, that this seems like it could backfire pretty quickly. The Los Angeles outfielder has to hope he doesn’t face the Giants starter anytime soon.