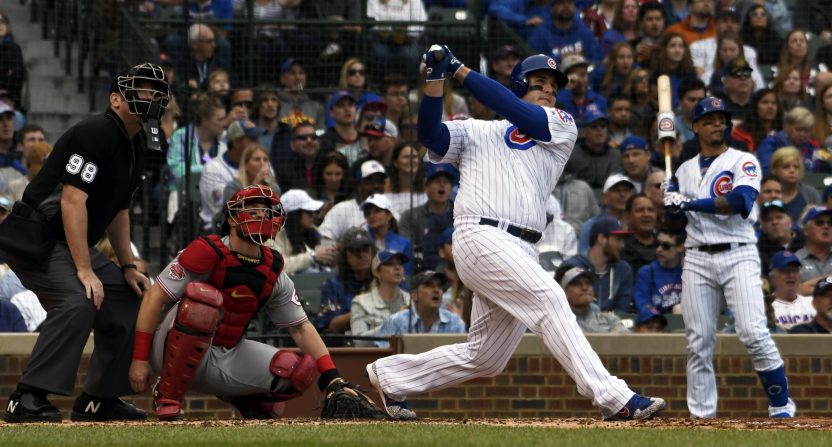 Along with annually being one of the best players in baseball, Chicago Cubs first baseman Anthony Rizzo is one of the best when it comes to work in the community. For Monday night’s Cubs-Braves game at Wrigley Field, Rizzo hosted 150 kids from the Lurie Children’s Hospital.

And on Tuesday morning, Rizzo held an event with Canon and surprised a Chicago-area Little League team with a baseball mini-camp (which included a meet-and-greet photo opportunity for the kids). Additionally, Rizzo and Canon will be onsite in Williamsport, PA during the Little League World Series in August, with the Cubs also set to play the Pirates in the 2019 MLB Little League Classic on Aug. 18.

I got an opportunity to talk to Rizzo during Tuesday’s event, with topics in the conversation including robot umpires, the extremely polite Kris Bryant, and what inspires Rizzo to be so active in the community. The questions and answers have been edited for clarity.

Have you had to pay for a meal or drink in Chicago since winning the World Series?

A lot of ’em? What is wrong with these people?

That’s what I’ve been saying.

Speaking of the World Series, did you think Kris Bryant overthrew you on the final out?

Nope. I thought it was a perfect throw that got the job done.

And speaking of Kris Bryant, have you ever heard him curse?

Yeah, I have. A couple times.

What’s your favorite home run you’ve hit, and would the recent go-ahead homer off Kenley Jansen rank in the top-10?

My favorite home run? Ooh. I have no idea. But yeah that’s top-10, the homer off Jansen. But I don’t know which one is my favorite.

Has the analytics and data revolution impacted how you prepare and even adjust in-game, or do you tend to stick to the same old routine and just go out and play baseball?

I definitely have taken on to it, have adjusted to it, and used it to my benefit. But for me, it’s just bits and pieces. It’s not like every single data piece I’m using. But there are definitely pieces for me that I use that are very beneficial.

Teams have been shifting (on defense) you like crazy over the years. I noticed that you’ve been hitting the ball to the opposite field more. Have you been focusing on that, or is that just something that happens by how they’re pitching you?

I think it’s just not trying to do too much. Just taking what they give me.

There was a pitch to you during Friday’s game against the Mets that was clearly outside, and home plate umpire Larry Vanover called it strike three. You weren’t very happy about it. It got me thinking- would you be in favor of an automated strike zone?

I love the human umpires. An automated strike zone… too dicey. It would really have to be the perfect strike zone.  I like the human element of the game. I think that if you bring in the robots, it might be a literal game-changer.

Let’s say you get to be commissioner for a day. What’s the first change you make?

I love baseball the way it is.

Do you think there’s an explanation for the team playing so much better at home than on the road so far, or can we just chalk up to baseball being weird and that it will probably correct itself as the year goes on?

I knew you’d say that.

Yeah. And favorite player growing up would probably be Derek Jeter or Gary Sheffield.

If professional baseball didn’t work out, what do you think you’d be doing today?

I have no idea. Good thing it worked out.

You’re known for your outstanding work in the community and were for recognized for it by MLB with the Roberto Clemente Award in 2017. Last night at Wrigley Field, you hosted 150 kids from Lurie Children’s hospital. And today, you’re taking part in a Little League event with Canon. What inspires you to want to give back to the community so much, and what more can you tell me about these events?

As far as the charity work, it’s just something that I’ve always wanted to do… especially when I was sick… to create my own foundation. And it’s really grown here in Chicago. It’s just taken off. I’m forever grateful for all of the donations.

My partnership with Canon is with Little League Baseball. That’s just all about the new Canon PIXMA printers, and how easy it is to print pictures. I know that.. at least myself… I’ve gotten away from really printing pictures, and it’s more been (just keeping them) on my phone. But there’s nothing better for me than just having a (printed out) picture in front of me. It’s a memory that lasts a lifetime.

Anthony, thanks very much for your time on what I know is a busy day (with a Cubs game against the Braves still to come), and good luck the rest of the season.

Sounds great, thanks. Appreciate it.