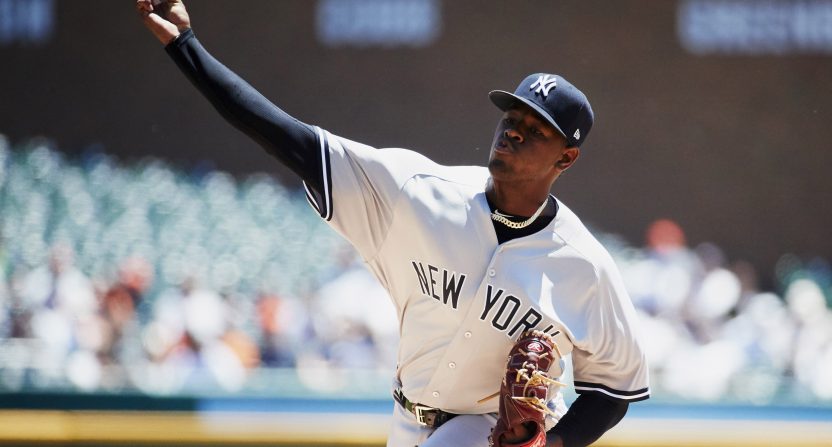 Yankees starter Luis Severino shut down the Detroit Tigers over eight innings Monday afternoon, allowing one earned run while striking out 10 batters and walking none. It was a remarkable outing, full of 99-mile-per-hour fastball and darting sliders. And the most amazing aspect of it? It wasn’t even out of the norm for the 24-year-old righty.

If it’s possible to fly under the radar while playing for the Yankees, Severino has done so. A year after finishing third in AL Cy Young voting, Severino has the third best ERA in the league, behind only Justin Verlander and Corey Kluber and tied with Gerrit Cole. Over the past two seasons he ranks behind only Chris Sale, Kluber and Max Scherzer in FanGraphs WAR and behind only Kluber, Scherzer, Stephen Strasburg, Clayton Kershaw and Verlander in ERA.

Roll that all together and you’ve got someone who ranks right up there next to Scherzer, Kershaw, Verlander, Kluber and Sale as one of of the very, very best pitchers in baseball. And yet would the average baseball fan recognize him on the street? It doesn’t feel that way.

So how has Severino flown so far under the radar? It’s probably in part because he emerged last year at the same time as Aaron Judge, who success was louder and more emphatic. As Severino’s teammate was smashing home run records, he was merely cruising along to a 2.98 ERA and 230 strikeouts in 193 1/3 innings. It probably also owes in part to the righty’s relative lack of flare. Severino doesn’t have a signature look like Noah Syndergaard. He doesn’t show copious emotion on the mound like Scherzer. He’s not outspoken off the field like Verlander. He just pitches. And, in truth, it likely has something to do with his uneven output last postseason, when he posted a 5.63 ERA in four starts.

Starting the day with some heat. pic.twitter.com/IuQOc38DP0

It’s also worth considering the shape of Severino’s young career. The righty debuted in 2015, at a time when Yankees fans were desperate for young talent to cheer for, and posted a 2.89 ERA in 11 starts. At that point, he looked like a future star. 2016, however, did not treat him well. He struggled in the early going and was demoted to Triple-A, then returned as a reliever, which some analysts viewed as his future role. When 2017 rolled around, his top-prospect sheen had worn off and he seemed to be just another young pitcher fighting for a rotation spot. With that in mind, his hot start looked like a fluke. So did his first half. Hell, his entire breakout season could have been part-mirage, for all anyone knew.

But now Severino is nearly a season and a half into being not just an all-star pitcher but a Cy Young-caliber one. He’s got the raw stuff, he’s got the composure, he’s got the prospect pedigree, and now he’s got the track record as well.

For much of the afternoon Monday, the Tigers looked absolutely lost trying to hit off Severino, flailing at fastballs up and sliders down. But Detroit hitters need not feel bad. Severino similarly carved up Houston in his last start and half a dozen other teams before that. He’s one of the best pitchers on the planet, and if anyone hasn’t noticed yet, it’s time.