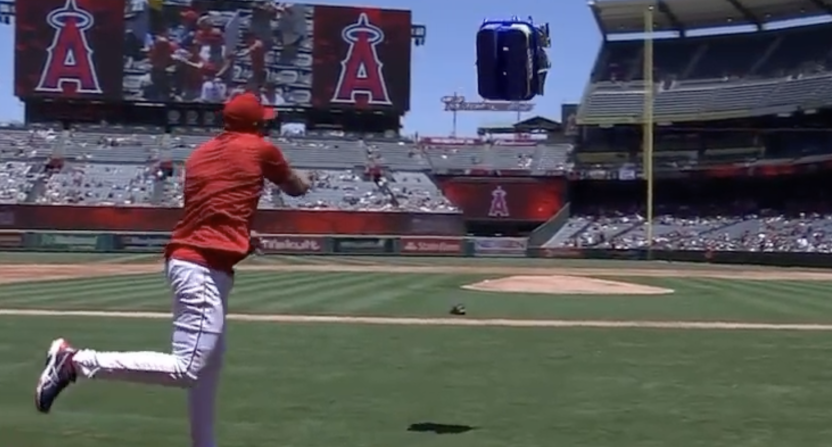 The brawl that broke out Sunday between the Los Angeles Angels and Seattle Mariners might have been the third most interesting thing that happened during that game.

While the bench- and bullpen-clearing brawl was certainly intense, lasting for quite a long time and leading to eight ejections, it also produced some rather silly news too.

First came news that a fan had a pizza delivered to Seattle’s Jesse Winker following his ejection and charted the entire experience on Twitter.

The second was the clip of Angels pitcher Raisel Iglesias taking things to an absurd level by launching a case of sunflower seeds in the general direction of the Mariners’ dugout, though from an extremely safe distance.

Raisel Iglesias tries to toss a box of sunflower seeds to the Mariners dugout. 🤣

Somehow, the slow-motion toss is beautiful in a strange way. Also, it’s completely silly and wonderfully stupid. What was he hoping to accomplish? What did the sunflower seeds do to anyone?

Naturally, the image of a baseball player angrily tossing a case of seeds towards another team from a faraway distance garnered some fun reactions from the MLB world.

"yo can I grab some seeds?"

Raisel Iglesias is confirmed NOT a sunflower seed guy pic.twitter.com/ys29LJJWBI

The Angels-Mariners brawl was on the TVs when we were in their clubhouse a bit ago. Everyone was watching, of course, then we went to talk with Nelson Cruz. He smiled and asked: "Why doesn't he like sunflower seeds?"

Shoutout to the Angel Stadium grounds crew who has to clean all that up. We’re sure they’re big Raisel Iglesias fans at the moment.