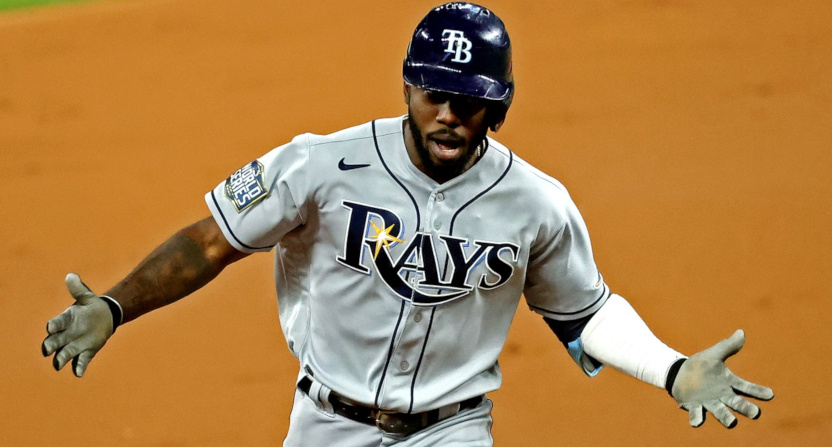 Tampa Bay Rays’ outfielder Randy Arozarena has been on fire this postseason, and that’s continued during the World Series. In Game 4 against the Los Angeles Dodgers Saturday, Arozarena set an all-time MLB record with his ninth home run of the postseason, and he’d go on to score the winning run after a bizarre sequence of events. In Game 6 Tuesday, Arozarena added to that record in the first inning with his 10th home run of the playoffs, this one coming off Dodgers’ starter Tony Gonsolin:

Looked at first like Randy Arozarena might not have gotten a full swing on this, but nope – his bat is just that quick. 1-0, #Rays pic.twitter.com/WLXY4kExc7

That just adds to the remarkable stats he’s accomplished:

How about this one:

He's the first rookie ever to drive in a run in 4 straight #WorldSeries games.

And the really crazy part is, he's still rookie-eligible – so he can break his own record in next year's World Series!#RaysUp

Randy Arozarena has more postseason HR than the following players in their careers:

#Rays Randy Arozarena has ten home runs in 25 career #postseason games – only Carlos Beltran (19 games) and Nelson Cruz (24 games) reached double-digits faster. Duke Snider and George Springer did so in 27 games, they are next on the list. Followed by Lou Gehrig in 29 games.

And here’s a chart of Arozarena’s home runs so far:

Animating all of Randy Arozarena's postseason home runs…. 7 of his 10 home runs have been to the opposite field. Incredible! pic.twitter.com/CYuzrZxNuX

It’s been an amazing postseason for Arozarena, and MLB Network’s Jon Morosi notes that there might even be a movie in the works:

True story: Randy Arozarena’s agent has spoken with a production company about a movie centered on the postseason star’s journey, from Cuba to Mexico to the U.S.

The script just got better.

We’ll see if Arozarena adds even more to this story.