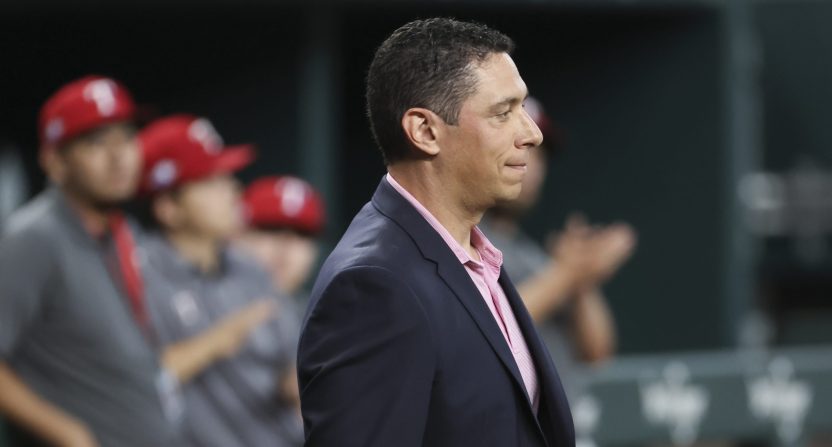 Days after firing manager Chris Woodward, the underachieving Texas Rangers continued their organizational upheaval on Wednesday. Jon Daniels, who had been Texas’ general manager since the end of the 2005 season, was fired.

The Rangers made the official announcement on Wednesday.

The Rangers today announced that Jon Daniels has been relieved of his duties as President of Baseball Operations, effective immediately. Executive Vice President & General Manager Chris Young will assume oversight of all aspects of the Rangers’ baseball operations department. pic.twitter.com/lc1ACfp1tZ

We certainly can’t call the move surprising. The Rangers enter Wednesday’s game against the Oakland Athletics at 52-64. Barring a massive turnaround, it will be Texas’ sixth-consecutive losing season.

Even given the team’s prior success in Daniels’ tenure,  most in the MLB world felt that moving in a different direction was the right move for the Rangers.

Difficult to defend franchise's performance over the last decade or so. https://t.co/HBuHQdwZ1e

Officially the end of an era. Daniels took the Rangers from a 30-year afterthought with one playoff win in 33 seasons to 2 World Series, 4 division championships, and 5 playoff appearances. The Rangers' heyday was long past, and the team is now deep in a multi-year rebuild. https://t.co/Xup2BLLC0a

I'm not a Jon Daniels hater, but if Chris Woodward needed to, so did he.https://t.co/g5KUFxTnZz

Daniels oversaw easily the most successful era in Rangers history. Until the 2010 season, the Rangers had only reached the playoffs three times — 1996, 1998 and 1999. Each of those three trips resulted in an ALDS loss to the New York Yankees with Texas winning only one combined game.

The peak of the Daniels era came in 2010 and 2011, when the Rangers won consecutive American League Championships. Unfortunately for Texas and its fans, neither of those World Series trips resulted in a win. The Rangers fell to the San Francisco Giants in five games in 2010. The following year against the St. Louis Cardinals, they blew two-run leads in the ninth and tenth innings of a potential Game 6 clincher before ultimately losing a heartbreaking seven-game series.

Texas would regroup but never enjoyed those heights again. The Rangers lost in the Wild Card Game in 2012 and dropped a one-game playoff in 2013. After a poor 2014 season, Texas was back in the playoffs in 2015 and 2016, winning the American League West in both years. In 2015, the Rangers opened up a 2-0 lead in the ALDS but lost three straight to the Toronto Blue Jays. The following season was an ALDS rematch with Toronto, which the Blue Jays swept.

While it seemed like the right time for Daniels and the Rangers to part ways, his prior success in Texas means that he’ll probably get another chance to be a general manager if he wants one.