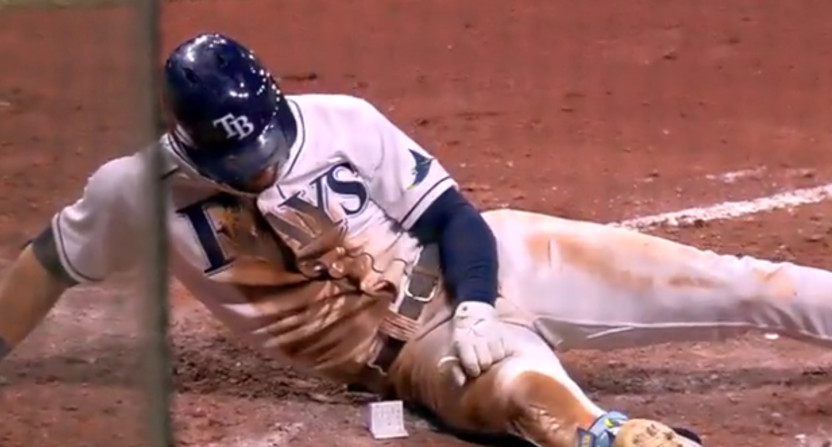 Major League Baseball has had many strange incidents around sign-stealing over the years, from binoculars and telegraphs through dugout phones, Apple Watches, and trash cans. Monday’s Toronto Blue Jays-Tampa Bay Rays game had what appears to be an exceptionally funny case of literal sign-stealing, though. In the sixth inning, Rays’ outfielder Kevin Kiermaier went for home, slid, and was tagged out by Blue Jays’ catcher Alejandro Kirk. But after that, Kiermaier noticed a card lying in the dirt and picked it up. It turned out that was a card dropped by Kirk, and it had the Blue Jays’ plans for pitching to the Rays:

The Blue Jays are not happy.

Last night in the 6th, Kevin Kiermaier slid into home plate and grabbed a card (video here). That card, I'm told, was from Alejandro Kirk's wrist band that fell out on the tag.

On the card: the Blue Jays' game plan on pitching to Rays' hitters. pic.twitter.com/wjjuYd3Bhk

Here’s more from Sportsnet’s Madani and Shi Dividi on how everyone was reacting to this a day later:

Several Blue Jays declined to discuss the matter while Rays general manager Erik Neander deferred comment, saying he had just learned of Kiermaier’s actions and was headed to the clubhouse to better understand what happened.

Asked about the matter, captured on video, Kiermaier said that he didn’t realize it was the Blue Jays’ card when he picked it up. “I never even looked at it, I’ll say that,” he said. “But at the same time, I’m not going to drop it or hand it back.”

Once the Blue Jays realized the card was missing, they sent a bat boy over to the Rays dugout to ask for its return. But the message back made a joke of the matter, saying something like, “we can’t hit Robbie Ray anyway.”

Madani also relayed these fuller comments from Kiermaier on Twitter:

Spoke w/ Kiermaier. These are his comments.

Around 5:20 pm, Kevin Cash came out to speak with Charlie Montoyo about it.

The Jays are pissed. As a team source told me, "if there’s one card we wouldn’t want any opponent to have, it’s that one"

More at 6:30 pm on @Sportsnet pic.twitter.com/Rp6iaGNPwM

There have been plenty of cases of lost orders and signals throughout history,  and many pro sports teams have been very strict on keeping track of their signals (except for when it’s a coach who loses them). But this one seems like a funny complaint from the Blue Jays, considering that they literally put their game plan into something that one of their players dropped on the field in front of an opponent. And there sure doesn’t appear to be a MLB rule prohibiting players from picking up paper off the field, nor should there be. If that information was so vital to keep so secret, maybe they shouldn’t have written it all into something that was easy to drop right in front of an opponent.