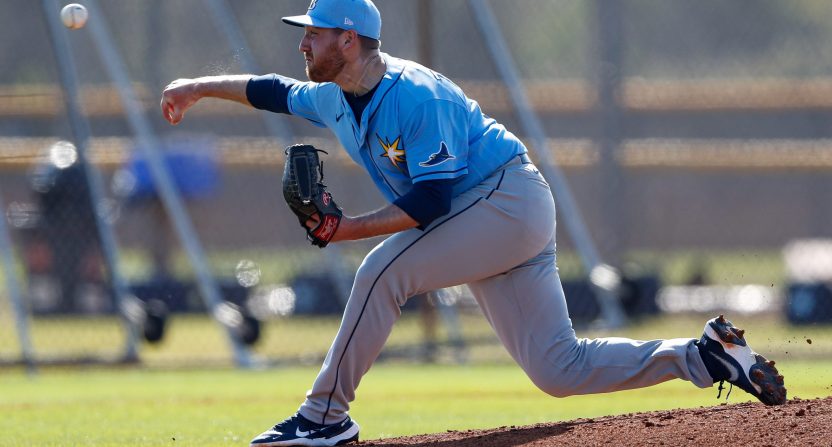 Durham right-handed pitcher Tyler Zombro was hit in the head by a line drive off the bat of Norfolk catcher Brett Cumberland, and fell directly to the ground and began convulsing. He was stretchered off the field and taken to a local hospital.

Tonight’s game has been suspended in the 8th inning after Bulls pitcher Tyler Zombro was hit by a batted ball.

Durham Bulls pitcher Tyler Zombro took a line drive into the head, fell face first and started convulsing on the ground. The game has stopped as players are praying and kneeling on the field. Stretcher is out at the DBAP.

Grim scene in Durham right now. Tyler Zombro, pitching for the Bulls, went down hard after a comebacker to the face. He was shaking uncontrollably before taken off the field via stretcher a few minutes later. Stunned silence.

Update: game has been called pic.twitter.com/9P32SGHArv

The Rays released a statement, saying that Zombro “is in stable condition.”

The Rays have issued the following statement on the condition of @DurhamBulls right-handed pitcher Tyler Zombro, who was hit by a batted ball during tonight's game: pic.twitter.com/DpUXcaZItT

“Tyler Zombro was transported to Duke University Hospital in Durham and is in stable condition. He is currently undergoing further treatment and observation. Additional updates will be provided as they become available. Our thoughts and prayers are with Tyler, his family and his teammates.”

Zombro, 26, has been in the Rays’ organization since 2017 after signing as an undrafted free agent out of George Mason. He has a 3.18 ERA in nine appearances this season for Durham.