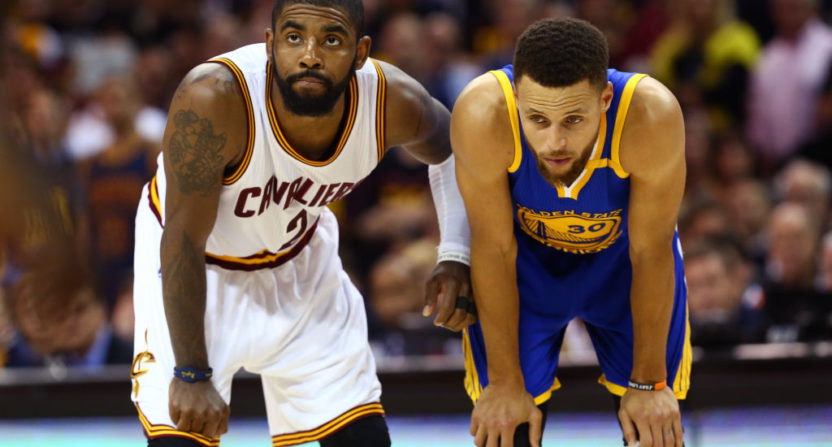 LeBron James isn’t harboring any hard feelings after Kyrie Irving received his request and got traded from the Cavs to the Celtics. But some people won’t let the past go so easily.

The Pawtucket Red Sox, Triple-A affiliate of the Boston Red Sox, will host “Kyrie Irving Night” on Thursday to celebrate the blockbuster trade that brought Irving to Beantown. Anyone wearing Celtics gear, or even just the color green, will receive free general admission to Thursday night’s game between Pawtucket and the Buffalo Bison. And if you arrive early, there will be a dunk tank with a man wearing a LeBron James jersey inside.

To honor Irving’s jersey change to number 11, one fan will win a prize pack with 11 complimentary tickets for next season, 11 hot dogs, 11 baseball caps, and 11 baseballs autographed by members of the team. No flat-earth merchandise, however.

“We know how popular the Boston Celtics are throughout the area,” PawSox executive vice president and general manager Dan Rea said, “and we hope that our fans will enjoy an evening that trumpets Kyrie Irving’s arrival.”

Add “Kyrie Irving Night” to the list of impressively creative minor league promotions this summer. The Daytona Tortugas had the highlight with Bob Ross Night, dedicated to the legendary PBS painting icon. The Brooklyn Cyclones, a Mets affiliate, and the Myrtle Beach Pelicans, a Cubs affiliate, held promotions to settle the New York vs. Chicago pizza debate. And the Eau Claire Express broke new ground by giving away free funerals.