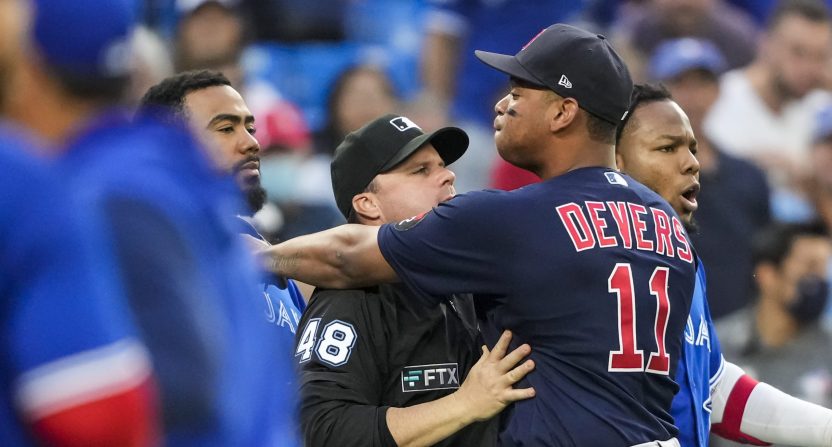 Just three days after two division rivals got into a full-fledged brawl, two others nearly followed down the same path in Wednesday’s game between the Boston Red Sox and Toronto Blue Jays.

Boston’s Nick Pivetta hit Toronto’s Alejandro Kirk with a pitch in the bottom of the third inning.

While Kirk was clearly not happy to be hit the pitch, nothing immediately materialized. Blue Jays manager Charlie Montoyo came out to check on Kirk but in the process, some words were exchanged. From there, Pivetta began arguing with Vladimir Guerrero Jr. on Toronto’s bench. Shortly thereafter, both benches cleared.

Nick Pivetta hit Alejandro Kirk on an inside pitch and Vladdy was not happy about it 😳 pic.twitter.com/qtzI1JsYeR

The benches clearing drew a big reaction from baseball fans, albeit with divided opinions.

Friendly note for #RedSox, do not make Vladdy angry https://t.co/UIkXUwPWr4

Vladdy bout that action I like this energy lmao https://t.co/ciww56QJI9

LET HIM LOOSE GEORGE, LET HIM LOOSE!!! Love how Vladdy was the first one out of that dugout ready to defend the leagues best hitter! #BlueJays #NextLevel #MLB https://t.co/DRYhLFgdOn

This Jays team is so dramatic and extra and unlikeable. https://t.co/6isTf8RV61

Pivetta clearly didn’t do it on purpose. Calm down Jays. If this had happened in Boston you wouldn’t see this type of drama. Blue Jays trying to act tough for the home crowd. #RedSox #dirtywater https://t.co/Z9jjs9KvU0

After seeing the inside of a bridal shop, this is nothing to me. https://t.co/HPt3Vcio8V

In the end, this was much ado about nothing. With the possible exception of Guerrero, it didn’t seem like anyone really wanted to fight. And frankly, given what happened to Archie Bradley during the fight between the Los Angeles Angels and Seattle Mariners, that’s a good thing.

The bigger issue here is what will happen going forward. Not only did this incident take place early in a game but since they are both American League East teams, the Red Sox and Blue Jays are going to see a lot of each other going forward.

For now, we can just put a pin in this incident. There’s a decent chance that it will be revisited at some point.