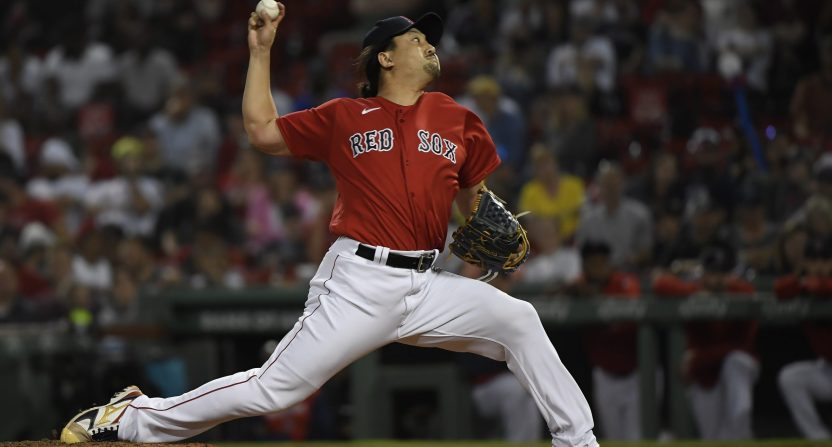 The first six innings of Friday’s game against the Baltimore Orioles were a dream for the Boston Red Sox. The last three were a dream, as well — a nightmare.

The Red Sox led 6-0 after two innings and 8-2 after six. At that point, starter Garrett Whitlock was pulled and things went astray. The Orioles chipped away at the deficit in the seventh inning, scoring three runs. When Baltimore’s Luis Urias came up with two outs in the eighth inning, two more runs had scored, cutting the deficit to 8-7. He hit a slow grounder to third base. Rafael Devers tried to throw Urias out, but his throw was not only late but wild.

The errant throw allowed  Rougned Odor to score from second on the error.

Orioles score on a Rafael Devers error and they've come back from down 6-0 to tie it! pic.twitter.com/UQCJCQXUll

The Red Sox got out of the eighth inning with the game still tied but couldn’t score in their half. Then, amazingly, things got even worse in the ninth inning.

Cedric Mullins and Trey Mancini led Baltimore’s half of the ninth inning off with singles, setting up a first-and-third situation with nobody out. Anthony Santander kept the party going for the Orioles, hitting a single that drove Mullins in and moved Ryan McKenna (who was pinch-running for Mancini) to third.

Santander later scored on a wild pitch and Ryan Mountcastle hit a sacrifice fly to score Austin Hays, giving Baltimore an 11-8 lead. The Orioles capped off the stunning rally with an RBI single from Odor that scored Adley Rutschman.

The Red Sox went down in order in the bottom of the ninth inning. For the Orioles, it was a thrilling comeback, the kind of game their fans might remember if, in a year or two, the team’s young prospects (led by Rutschman) are leading a new, more successful era of Baltimore baseball. This could be remembered as something of a jumping-off point.

For Boston, not so much. This was an epic collapse, something the MLB world was quick to point out.

What a meltdown for the Red Sox bullpen.

A live look at the Red Sox bullpen pic.twitter.com/RXdDLfEQ9M

This Red Sox game is a prime candidate for worst loss of 2022 so far. They are humiliating themselves tonight.

Every Red Sox reliever to pitch on Friday allowed at least one earned run. Outside of Hirokazu Sawamura, all allowed at least two earned runs. Matt Strahm had the roughest outing of the group, allowing four runs (three earned) and five hits, taking the loss.

Heading into Friday, there was a sense of optimism in Boston. The Red Sox had won seven of their last eight games and seemed to be headed in the right direction. This is, of course, only one loss. But it’s hard to imagine anyone at Fenway Park feeling that optimistic about the Red Sox after this one.