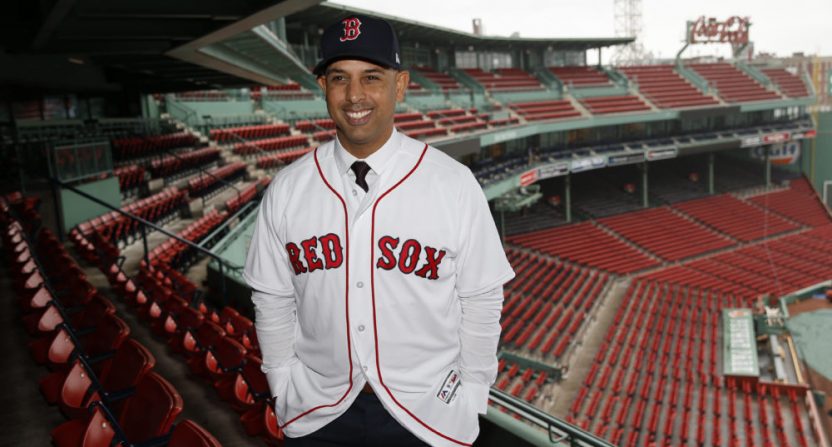 Alex Cora returning as Boston Red Sox manager for the 2021 season appeared to be an inevitability.

But the team made it official on Friday, bringing back Cora after he served a one-season suspension for his roles in the Houston Astros’ 2017 sign-stealing scandal and similar scheme with the 2018 Red Sox. (Both teams won the World Series in those respective seasons.)

Cora replaces Ron Roenicke, who managed Boston for the shortened 2020 season. Roenicke was the team’s bench coach under Cora and was dismissed following this season, during which the Red Sox finished 24-36 and last in the AL East. Whether or not he’ll return to Cora’s staff has yet to be determined.

Breaking: Alex Cora is back as Red Sox manager

Obviously, the Red Sox were already familiar with Cora, who managed the team for two seasons and a World Series championship in 2018. However, general manager Chaim Bloom didn’t hire Cora and there was some belief that he might prefer to hire his own choice for the position. That may be why Cora wasn’t automatically hired as soon as his suspension ended, though Bloom likely wanted the opportunity to look at other candidates.

(Curiously, one of the candidates was not Rays bench coach Matt Quatraro, who’s interviewed for other MLB managerial openings in recent years and has a connection to Bloom, who came to Boston from the Tampa Bay organization. But according to the Boston Sports Journal’s Sean McAdam, Bloom had an agreement with the Rays not to hire anyone from his former team for a two-year period. )

Some will object to Cora being rehired so soon after being penalized for his role in arguably the worst competitive scandal in baseball history (and following it up with similar methodology the following season), but his involvement in those sign-stealing schemes did cost him his job with the Red Sox — albeit for one season.

Cora was suspended following MLB’s investigation into the Houston Astros’ 2017 season along with Astros general manager Jeff Luhnow and field manager A.J. Hinch. The Red Sox fired Cora after that penalty was announced.

With Boston’s last-place finish, Cora isn’t jumping back into a ready-made situation for another World Series run. For one thing, star outfielder Mookie Betts was traded to the Los Angeles Dodgers, helping his new team win the 2020 World Series.

But the lineup still has a strong core of talent including Xander Bogaerts, Rafael Devers, Andrew Benintendi, and Christian Vazquez. Alex Verdugo, who came over in the Betts deal, also had a promising first season in Boston. J.D. Martinez will also return, choosing not to opt out of his contract after batting .213 with .680 OPS this past season.

The team’s pitching staff, in particular, needs major renovation after the 2020 season. Chris Sale may or may not be part of that effort coming off reconstructive elbow surgery. At the very least, he shouldn’t be expected to immediately pitch at the ace-level performance he sustained through most of his 10-year MLB career. Nathan Eovaldi is under contract for two more seasons unless Bloom uses him as a trade piece this offseason. And Eduardo Rodriguez is recovering from a heart condition related to COVID-19.

Rebuilding the starting rotation and bullpen, along with deciding whether or not to re-sign center fielder Jackie Bradley Jr., will be one of Bloom’s most crucial offseason projects and give Cora plenty of work to do as he resumes his former job.