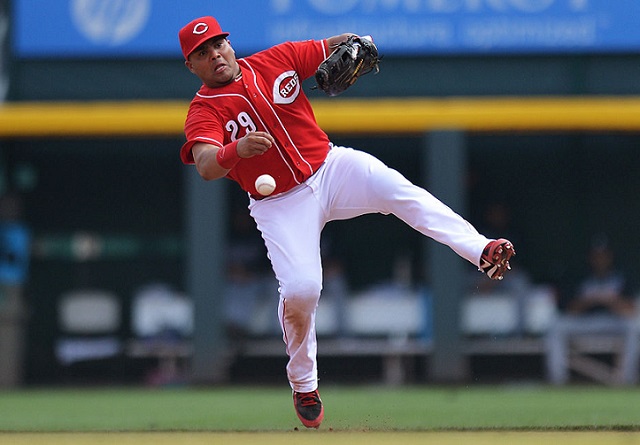 With every story that emerges about baseball players defecting from Cuba, it becomes more and more clear exactly how dramatic and life-changing an endeavor coming to the U.S. is for these guys.

And while Brayan Peña’s story, which he published on The Players’ Tribune on Thursday, isn’t quite as harrowing as Yasiel Puig’s story of kidnapping and extortion, it’s every bit as emotional. Peña beautifully documents how a friend offered him a choice of green or red batting gloves, with green signaling a decision to defect and red the choice to stay, and how the catcher then climbed out a bathroom window with no assurance of what waited for him outside.

Peña then describes how scary it was to leave his homeland and how uplifting it was to return to Cuba on a recent goodwill trip with other players.

The whole story is really incredible and you should totally read it all, but here are a couple particularly powerful passages. Here’s Peña describing the moment he reached the Major Leagues and what it felt like to share the news with his family.

It took me a year in Costa Rica trying out for scouts before I was drafted by the Atlanta Braves, and then five years in the minor leagues, but in 2005, my manager called me into his office and said, “Brayan Peña, tomorrow you go to Boston. You’re going to be a big league player.”

Listen, I know I’m never going to be a Hall of Famer. I may never win a World Series. But I could thank God every single day until the day I die for that phone call with my family, and it will still not even be close to enough thanks.

And here’s the Reds catcher on what it was like for him and the other Cuban players with him to land back on the island after years away from their home.

I was sitting next to Abreu. He risked his life fleeing Cuba on a small boat and had not seen his young son in almost four years. He was quiet the whole flight.

All of a sudden, I could feel the wheels of the plane being lowered for landing. We looked out the window and saw …

Man, it’s hard to even talk about this.

We looked out the window and saw the green tops of the trees. We saw our home.

I looked at Abreu and said, “This is real, man. This is really real.”

Puig, he jumps out of his seat and starts dancing in the aisle.

The flight attendant literally had to come get us all under control.

“Hey! Guys! You have to put your seatbelts on!”

When you see these players on TV and hear they’re from Cuba, you know generally what that means. But until you hear first-hand exactly what it means to defect from your home, it’s tough to really appreciate all these players have gone through to get where they are now. Hopefully with relations between the U.S. and Cuba improving, stories like Peña’s will become less common and the process of immigrating to this country from Cuba, to play baseball or otherwise, will become less harrowing.

For now though, give Peña’s story a read.