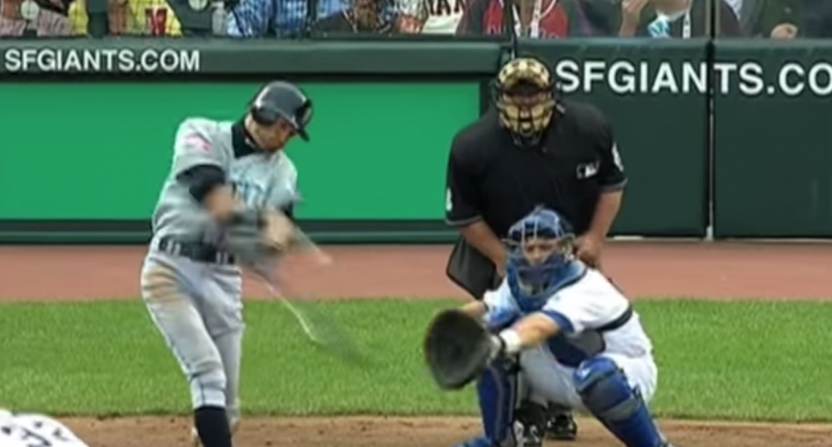 After 17-plus seasons in the major leagues, on top of nine others in Japan, Ichiro Suzuki’s playing career appears to have reached its conclusion. The Mariners announced Thursday that the outfielder would step away from the field and transition to a front-office role, and although Ichiro has not declared his intention to officially retire, this is almost certainly the end.

In the 24 hours since Seattle’s announcement, many fans, players, and writers have reflected on Ichiro’s incredible legacy. His 3,089 hits in MLB and 4,367 hits overall. His incredible MVP rookie season. His record-breaking 262-hit campaign in 2004. His laser throws from the outfield. His innovative swing, in which he ran toward first base while hitting the ball, to give himself a head start down the line. His legacy as the first Japanese position player to thrive in the United States.

But I want to home in on something else, on the one moment above all that strikes me as Ichiro’s coolest: his inside-the-park home run in the 2007 All-Star Game.

First, let’s set the stage. In July 2007, Ichiro was 33 years old, in his seventh big-league season. He was a known commodity, having already won his MVP award and broken George Sisler’s single-season hits record. Appearing in his seventh consecutive All-Star Game, he had graduated from side-show curiosity to main attraction, on par with baseball’s other biggest stars.

By the time Ichiro stepped to the plate in the fifth inning against Padres righty Chris Young, he had already collected two hits on the day, a single to right field in the first inning and a single to left field in the third. His third at-bat arrived with one out and Brian Roberts on first base, with the American League trailing 1-0.

On the first pitch he saw from Young, an 89-mph fastball on the inner half of the plate, Ichiro whipped his bat through the strike zone and lifted a fly toward right-center field. At nearly any other park, the ball would have likely cleared the fence, but at cavernous AT&T Park it met the outfield wall, where it collided gently with a banner and caromed away from right fielder Ken Griffey Jr. Griffey gave chase, but there was little he could do. Roberts scored easily, and Ichiro glided around the bases to record the first (and still only) inside-the-park home run in All-Star Game history.

If it were possible to encapsulate a Hall of Fame player’s entire legacy in one clip, this might be it. There’s that brilliant left-handed swing, in which Ichiro stays square until the exact moment the ball leaves the bat, before opening up toward first base. There’s the slight stutter-step he takes upon leaving the batter’s box, indicative of the subtle swagger close observers recognized early. His graceful trip around the bases, with those long strides that make a dead sprint look nearly effortless. His shy grin as he crosses home plate. And, of course, the way his teammates embrace him in the dugout, with wide eyes and broad grins. They were as awed as the rest of us.

At his best, that’s the type of player Ichiro was. The type who would drop your jaw and make you smile.