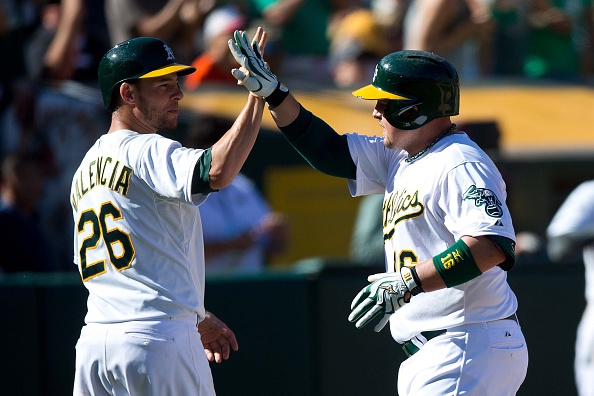 On Sunday, it was reported by Susan Slusser of the San Francisco Chronicle that the Oakland Athletics’ Billy Butler was hurt in an altercation with teammate Danny Valencia.

While we didn’t have a whole lot of details at the time, Slusser has surfaced more details on what exactly happened between the two teammates.

Slusser spoke to two players who spoke on the condition of anonymity:

According to the players, the incident occurred before batting practice Friday when an equipment representative quizzed Valencia about a pair of off-brand spikes in Valencia’s locker. Valencia previously had been told not to wear those shoes in games.

Valencia told the representative that he only uses the non-issue spikes during pregame workouts. According to multiple sources, Butler, who has an equipment endorsement with a different company, jumped in to tell the equipment rep that Valencia was lying and regularly uses the non-standard spikes. Butler allegedly told the representative that the company should drop Valencia’s endorsement deal.

After the rep departed, the players said, Valencia confronted Butler and told him, “Don’t you ever loud talk me in front of a rep. That was wrong,” and walked aggressively toward Butler. Butler turned around, took a couple steps toward Valencia, and according to both witnesses, said, “I can say whatever I want and your b— ass isn’t going to do anything about it.”

One player said that the men leaned in, bumped heads and then started pushing each other, Valencia started swinging and hit Butler in the temple. After the players broke things up, Butler told the players he was OK.

The San Francisco Chronicle’s John Shea was able to get more details on the situation as Valencia and Athletics general manager David Forst met with the media Monday afternoon:

Valencia said he's moving on from incident. Asked about Butler relationship, he said, "He's my teammate."

If there's respect between Valencia and Butler, neither expressed it since incident. The sides haven't talked.

Forst said he’s not concerned, that this is not the first clubhouse fight ever. He said it’s first A’s had this year.

Shea also reports that Butler will head to the seven-day concussion DL, and that both Butler and Valencia have been fined. No player will serve a suspension, and Butler’s locker was also moved to the far end of the Athletics clubhouse, according to John Hickey of the Bay Area News Group.

The story of the altercation seems odd, but altercations happen in locker rooms all the time across sports. Some are brought to light, and some aren’t. But at the same time, they also aren’t as strange in nature as this one.