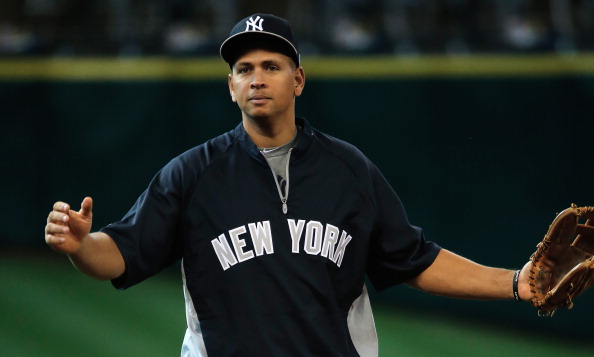 The Alex Rodriguez retirement tour that every baseball fan is surely clamoring for might be getting an unceremonious end before it even starts. The Yankee slugger could be released by the team before the 2016 season’s end, according to a report from the New York Daily News.

The Yankees were big-time sellers this trade deadline, dealing away Aroldis Chapman, Andrew Miller, Carlos Beltran, and Ivan Nova from the big league club in exchange for minor league prospects to bolster the franchise’s future. The club is close to full-rebuild mode, and an unpopular, 41-year-old designated hitter who can barely stay above the Mendoza line is hardly a franchise building block.

Making matters worse, Rodriguez’s contract is an albatross. He is still making $21 million this year and is guaranteed another $21 million next year. With a contract that massive, and his bat demonstrating few signs of life, the former MVP is essentially un-tradeable. So instead of blocking a big league roster spot and at-bats for still-productive veterans or developing hitters, the club may opt to send Rodriguez on his way and simply eat the money he is still owed.

Still, the Yankees are at least publicly standing behind their man, for now.

“There’s a lot that’s happened today that we haven’t had a chance to really sit down as a staff, sit down with Brian and talk about what we think is best,” Joe Girardi said before the game, before adding cryptically, “I’m not so sure there won’t be other things done during the course of this week, too.”

Asked if “other things” alluded to possibly making a move with Rodriguez, Girardi quickly clarified to say: “I’m not talking about that. Obviously we called up two players really quickly… When I said that, that’s not what I meant.”

However, if the Yankees do not release him before the end of this season, there is a strong likelihood they will this winter.

To his credit, Rodriguez is still optimistic about his future and said he still has his heart in the game.

“I hope not,” Rodriguez told the Daily News when asked about the story after not playing in the Yankees’ 6-5 win over the Mets. “I want to play and think I can make a difference on the field and in the clubhouse.”

Rodriguez is one of baseball’s greatest players ever, as evidenced by the fact he is only four home runs away from the 700 club, but he is also one of its most unpopular. It is tough to imagine that another club would give him a shot in his age-42 season. Though maybe fans hate watching Rodriguez’s pursuit of Babe Ruth’s 714 homers for third-place all-time would be enough of a ticket boost to take a flier on him.

It is clear though, that if Rodriguez was dreaming of a Kobe Bryant-like retirement season in 2017, he is in for a rude awakening.