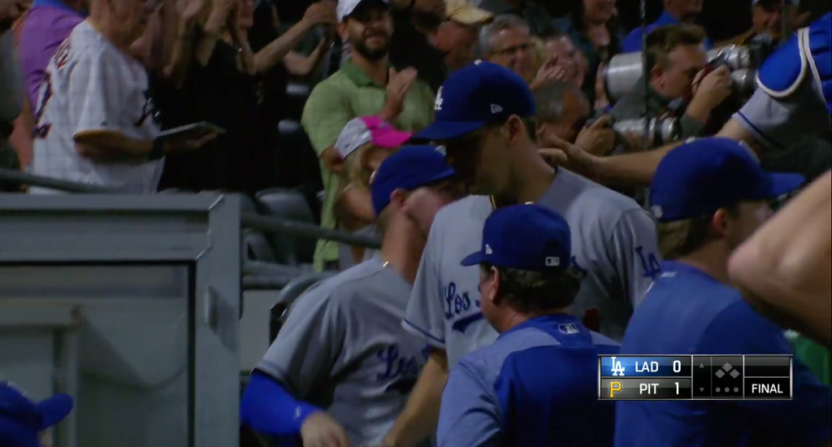 Last year, one of the more fascinating MLB moments was when Rich Hill was removed from a perfect game. Hill was very displeased at the time, but the Dodgers made the decision as Hill had just recently returned from blister trouble, and Los Angeles was getting ready for a postseason run.

But still: a perfect game! Hill was 36, and it was fair to wonder whether he’d ever have another shot at that kind of performance.

Now at 37, after battling back from a slow start to his season, Hill has returned to dominant form (well, his form of dominance), and on Wednesday night, he did indeed have another shot at it, taking a perfect game all the way into the 9th inning, aided by plays like this from Chase Utley:

Still, Hill escaped the 9th without allowing another runner! Unfortunately, the game was tied 0-0, meaning Hill had just thrown 9 no-hit innings, but it still wasn’t enough to complete the feat. But with less than 100 pitches thrown, Hill went back out for the 10th inning. History had been made, and more was still possible:

Such a cruel way for Rich Hill to lose a perfect game! First time in @MLB history a PG bid has ever ended in 9th inning on an error.

A Maddux: Complete game in fewer than 100 pitches

A Haddix: Losing a game after throwing 9 no-hit innings

Rich Hill has a chance at both

Just 4 pitches later, it was all over:

No-hitter over. Ballgame over. Josh Harrison walks it off for the @Pirates. Wow. pic.twitter.com/BynpNnsN7r

Josh Harrison hit a walk-off homer into the first row of seats in left, just avoiding an all-out robbery attempt by Curtis Granderson, who crashed into the wall at full speed in an effort to save the no-hitter and the game.

That’s heartbreaking for Rich Hill, and indeed fulfilled both requirements of a Maddux and a Haddix; his performance was remarkable, one of the better ones you’ll see this year, and it still ended with a loss. And now, nearly a year later, we’re left wondering whether Hill will ever have another shot at something like this.

Baseball sure is a funny game.