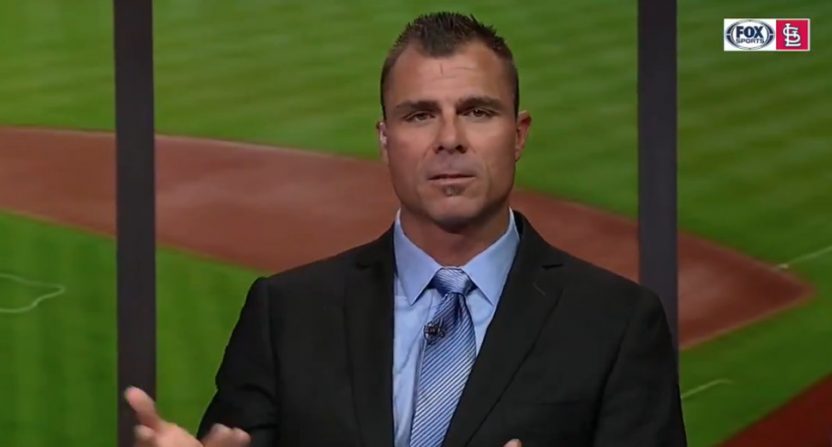 Rick Ankiel has one of the more unique Major League Baseball careers in history, beginning as a St. Louis Cardinals’ second-round draft pick as a starting pitcher out of high school in 1997 and making it to the majors in 1999, where he finished second in rookie of the year voting. But in the 2000 postseason, he suddenly picked up “the yips” and became unable to throw strikes, throwing five wild pitches in a NLDS start and doing even worse in a NLCS start. Those control issues stuck around and led to Ankiel spending significant time in the minors before eventually switching to outfield in 2005, and he wound up making it back to the majors in that role with St. Louis in 2007 and played through 2013 with a variety of teams. He’s been working as a pre-game and post-game analyst on Fox Sports Midwest’s Cardinals’ broadcasts this year, and he used that platform Monday to announce he’s contemplating a MLB comeback…as a pitcher.

Major announcement from @TheeRickAnkiel: He’s planning a comeback as a relief pitcher for the 2019 season! #STLCards pic.twitter.com/eXNuLQHHS5

In there, Ankiel talks about pitching at the Bluegrass World Series (playing with former major leaguers against college players), where he struck out the only batter he faced in an early game, his first appearance on the mound since 2004. (He also went 2 for 4 at the plate with four RBIs.) And he says that he’s been working with a kid who’s also struggled with the yips, that throwing with him has felt good, that MLB’s in a place where his fastball/curveball stuff would shine, and that there’s maybe more to be added to the book he wrote last year:

“I’ve been working with a kid who’s got the yips, throwing with him for the last two months or so, and it’s felt really good, so it’s kind of been peddling it around, starting to get the itch. And you know, when I take a look at pros and cons, I can make a whole list of pros, I got nothing on the cons, zero. My kids want to see me play, and I’m at a place right now personally where I could care less if I throw the ball off the backstop. It doesn’t matter. And when you take a look at baseball, the game has swung back around to my style of pitching, you talk about the big curveball, fastball. So I figured why not come back as a lefty reliever and put one more chapter on my book?”

Ankiel also admits that there will be a lot of hard work and training ahead, and that he plans to get into that and see how it goes. So this may not wind up leading to anything. But if the 39-year-old Ankiel still has some of the stuff that made him so hard to hit (he struck out 194 batters in 175 innings as a 20-year-old rookie) and has improved his control, it’s maybe not unimaginable that he could make a further impact on the field, especially as a lefty reliever (a position that’s often in short supply). And if he does pull that off and return to MLB, that definitely would be worth at least another chapter.