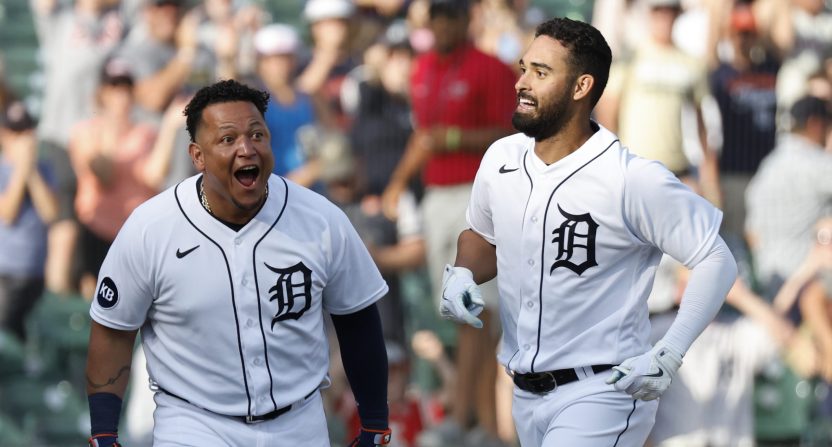 Fans of the Detroit Tigers were excited when it was announced that Riley Greene would be called up. On Saturday, he showed why.

Detroit trailed the Kansas City Royals 3-2 heading into the ninth inning of Saturday’s game. But with one out, Victor Reyes came up and sent a ball over the right field to tie things up. The game would not be tied for long.

Greene hit after Reyes and drove the second pitch to straightaway center, over the wall for not only a walk-off home run but also his first career homer.

The home run capped off an outstanding game from Greene. He went 2-for-4 with a walk and scored three of Detroit’s four runs.

Not a bad way to hit your first big league homer! https://t.co/REnZa5049d

The walk-off was enough.

But Riley Greene also popped up everywhere on the Savant leaderboard for today’s game in Detroit.

Signals of how comfortable he already is in the Majors. pic.twitter.com/zeQAvrZYRW

Riley Greene. First MLB homer. A walk off into the shrubs. What a swing.

I cannot believe I was lucky enough to attend that game. Riley Greene's first career home run is a walk-off. Just unreal.

With a .282 batting average and .417 OBP entering Saturday’s game, Greene had hit well for the Tigers since debuting. But with no home runs and a .308 slugging percentage, he’d yet to find his power. Before Saturday, he not only didn’t have a home run but was slugging only .308. That changed in a big way.

In the first inning of the game, Greene hit a ball to deep centerfield. While it would have been a home run in most stadiums, Comerica Park’s big dimensions meant that Greene had to “settle” for a triple.

Now that's how you lead things off, as @Greene21Riley smacks a triple to the wall in center field! #DetroitRoots pic.twitter.com/a3b5TkVBuH

That triple, coupled with the walk-off home run, moved Greene’s slugging percentage to .442. And given that he’s only 21-years-old, there’s no reason to think that Greene will do anything but get better.