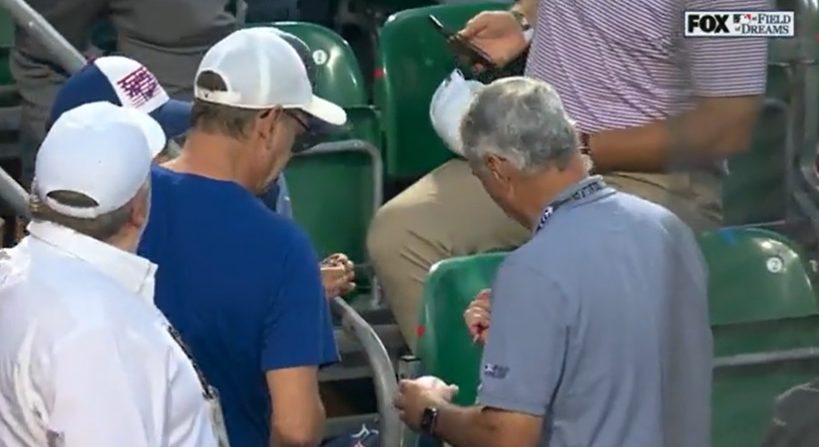 Among the many baseball luminaries on hand at Thursday’s Field of Dreams game between the Chicago Cubs and Cincinnati Reds was commissioner Rob Manfred. Something he did during the game got the attention of a lot of viewers — Manfred signed autographs.

Fox cameras spotted the commissioner signing the baseball of some “lucky” fan. But before signing the ball, Manfred seemingly pointed at his signature that’s already on all official balls — because that’s a completely endearing thing to do.

I'm calling it: this was staged. pic.twitter.com/bKRd0tTfMQ

Pointing out his own signature aside, this seems like a nice gesture on the commissioner’s part. Manfred wasn’t exactly popular before the lockout that halted spring training and delayed the regular season. While that’s long been resolved, it certainly did nothing to bolster his popularity. So, being out there signing autographs for kids during one of MLB’s showcase events makes sense from Manfred’s perspective.

But there are two people involved in an autograph. One is the person signing the ball, the other is the person asking for the signature. And it’s hard to understand what exactly the people in the latter group were thinking.

So, there was one natural question from the MLB world to come out of this. Who in the world wants Manfred’s autograph?

I can’t imagine asking Rob Manfred to autograph a baseball.

“Son, come here. We can get Rob Manfred’s autograph!”

"Hey we were told to get an autograph from you but have no idea who you are."

"That's my name." (you can clearly see him say this) https://t.co/g1oXLePNoc

My reaction when I saw someone ask Rob Manfred for his autograph at #FieldofDreamsGame pic.twitter.com/BUsqabztnn

When you see people on TV getting Rob Manfred's autograph pic.twitter.com/7vkPyYZ9l3

You gotta be on a whole other level of shameless to let your son go ask rob manfred for his autograph bro 😂 pic.twitter.com/UvCaf7psTw

How much are those kids being paid by @MLB to ask for Rob Manfred’s autograph? #FieldofDreamsGame

Perhaps there was an ulterior motive of some sort.

If I were getting autograph from Rob Manfred, it’d be a folded-over sheet of paper hiding express consent to rebroadcast and disseminate MLB games

That would certainly be a high-level move. Or, perhaps it was something waiving (or at least limiting) all of the blackout restrictions MLB has throughout the country and especially in Iowa. If that wasn’t what it was, we hope that the next autograph seeker is on the case.