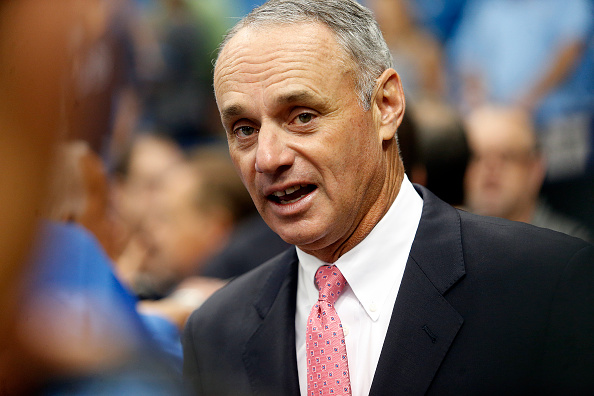 On Monday night, ESPN will host The Return of Sports, a two-hour special that features Mike Greenberg having (pre-recorded) conversations with six pro sports commissioners. One of those commissioners is Major League Baseball’s Rob Manfred, which makes for an awkward situation on the surface, seeing as how MLB and the Players Association have gone nowhere in season negotiations over the last several weeks.

Update: ESPN released a clip of Manfred’s appearance on SportsCenter before The Return of Sports premiere:

Rob Manfred did go forward with his interview with Mike Greenberg on ESPN’s The Return of Sports special. Said optics are “just a disaster for our game”. pic.twitter.com/2dBm74eOsk

Rob Manfred to @Espngreeny: "It’s just a disaster for our game, absolutely no question about it. It shouldn’t be happening, and it’s important that we find a way to get past it and get the game back on the field for the benefit of our fans."

Major League Baseball commissioner Rob Manfred told ESPN on Monday he’s “not confident” there will be a 2020 baseball season and that “as long as there’s no dialogue” with the MLB Players Association, “that real risk is going to continue.”

“I’m not confident. I think there’s real risk; and as long as there’s no dialogue, that real risk is gonna continue,” Manfred said when asked if he was confident there would be a season.

On Saturday, the MLBPA rejected — and players voiced their displeasure about it *immediately* — MLB’s latest proposal, and said that they’re done with the (going-nowhere) negotiations. MLBPA executive director Tony Clark said in a statement, “It unfortunately appears that further dialogue with the league would be futile. It’s time to get back to work. Tell us when and where.”

Following the motionless negotiations, the expectation had been that Manfred and MLB would unilaterally impose a season of 48-to-54 games (with players receiving full prorated pay).

But Bill Shaikin of The Los Angeles Times reports that MLB sent a letter to the MLBPA on Monday, saying that there won’t be a 2020 season unless the players waive a potential grievance against the league.

Source: In a letter today, MLB told the MLBPA there would be no 2020 season unless the players waived any legal claims against the league.

Translation: We won't play unless you waive a potential grievance.

So that's what's up. Owners realized if they mandated absurdly short season, they'd face a grievance that would mean they have to open the books. So they won't start the season without the players waiving that grievance in advance.

Here’s more of what Manfred reportedly said (or, will say later on television) on this topic to Greenberg, via Passan:

“I had been hopeful that once we got to common ground on the idea that we were gonna pay the players’ full prorated salary, that we would get some cooperation in terms of proceeding under the agreement that we negotiated with the MLBPA on March 26,” Manfred told ESPN. “Unfortunately, over the weekend, while Tony Clark was declaring his desire to get back to work, the union’s top lawyer was out telling reporters, players and eventually getting back to owners that as soon as we issued a schedule — as they requested — they intended to file a grievance claiming they were entitled to an additional billion dollars. Obviously, that sort of bad-faith tactic makes it extremely difficult to move forward in these circumstances.”

So, this is an absolutely embarrassing mess for Manfred and MLB just continues to get messier. For what it’s worth, MLB Network’s Jon Heyman reports that he’s heard from front office executives that are all surprised by Manfred suggesting the possibility of no season, and one executive said, “I can’t imagine not having one.”

There’s lots of complications now in MLB talks — possible grievance, new rules, pay/length of season and yes Covid. You might even say it’s a mess. But top execs contacted were all surprised Manfred mentioned possibility of no season. Said one, “I can’t imagine not having one.”

Well, it’s naive to fully assume there will be a season in 2020. It’s already June 15, with zero progress made to this point, and now the commissioner is even expressing doubt.