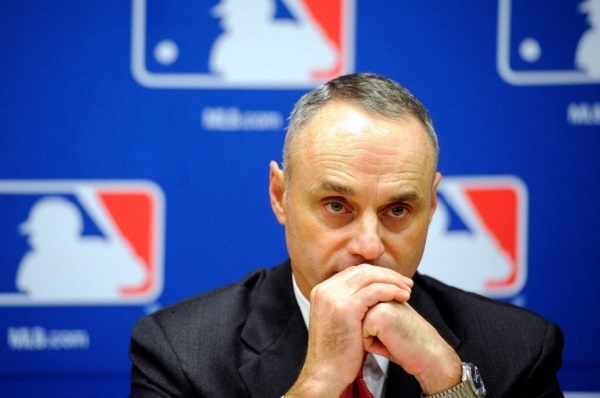 The topic of expansion in Major League Baseball has been floating around for a while, especially since Rob Manfred has taken on the role of commissioner. On Thursday, Manfred attempted to convey expansion for baseball may be in the pipeline, but it is not exactly a top priority at this point in time.

Manfred’s latest comments on expansion in baseball came during a Thursday meeting with the Associated Press Sports Editors. Manfred’s focus right now is more on establishing stability within MLB’s current footprint rather than expand the membership for the sake of balancing things out for the schedule.

“I have said publicly that I think baseball’s a growth sport, a growth business, that sooner or later growth businesses expand,” Manfred said. “I do see expansion as a longer-term proposition. I think there are certain issues in the game that need to be resolved first — the stadium situations in Tampa and Oakland being at the top of that list.”

That is a fair point to make for the commissioner, who sees two of its existing franchises continue to look for a solid plan for updating or building a new baseball stadium in order to get out of stadiums that are simply not suited to show off the best baseball has to offer. Issues like stadium deals are an ongoing battle for professional sports teams, and the possible relocation of at least one franchise may end up coming before expansion. However, Manfred is doing what he can to make sure relocation of a franchise is not the best possible solution, something baseball has done just once since 1973.

“In the longer term, there will be expansion. … If we were to expand, I do think a city that makes sense geographically — meaning in terms of realistic travel distances and is outside of the 48 contiguous states – would be a positive choice for us in terms of growing the game.”

You hear that Montreal? Your time is coming, maybe. Manfred attempted to suggest he was not directly referencing Montreal, but he was totally talking about Montreal. Or was he referring to Mexico City? Or Puerto Rico? Or… Cuba? Baseball has options to explore when the time comes to give expansion a good hard look. Of course, there are those who believe the sport would actually benefit more from contraction, and maybe even a reduction in the number of games played. That is unlikely to happen, but expansion appears to be an inevitability down the line.