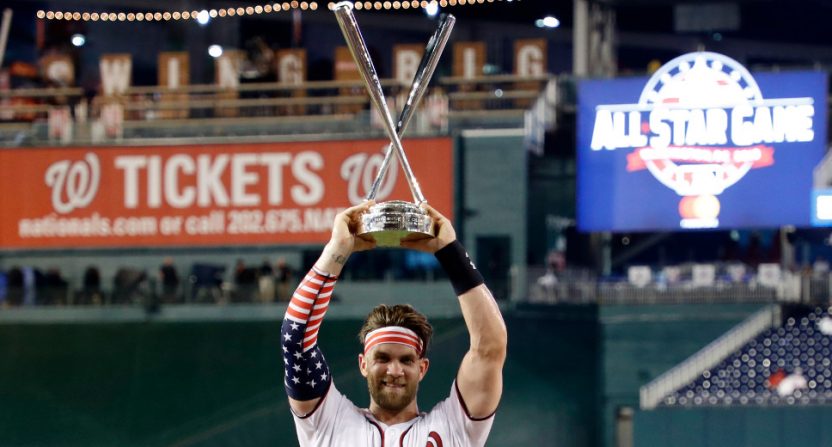 With the expansion of legalized sports betting, there are potential benefits for leagues and networks, but also some risks. MLB commissioner Rob Manfred touched on both of those elements in an in-studio interview on The Dan Patrick Show Tuesday, talking about betting as “a challenge and an opportunity”:

That interview’s interesting, for comments about how betting can improve fan engagement (but not if overdone, with the DraftKings/FanDuel ad wars cited as a negative there), for comments about how betting could be possible at ballparks on mobile phones but MLB and its teams won’t directly be involved in providing betting, and especially for Manfred’s discussion of MLB’s talks with sports in Europe (where legalized sports betting has long been established) and what they said about the integrity side (0:26):

“They said the single biggest mistake you can make is not being active in trying to determine what the legal framework’s going to look like from an integrity perspective. We need laws, whether they’re federal laws, state laws, whatever, that allow us to protect the integrity of our sport. That’s our job, we’re not going to delegate it to some regulator in New Jersey or whatever. With all due respect, we care more about it. It’s what we’re about.”

And where that’s particularly notable is with this coming a day after the Home Run Derby. That event’s finish, which saw Bryce Harper hit nine home runs in 47 seconds near the end to win, spurred controversy, with some upset that Harper’s pitcher (his father Ron) was throwing new pitches before the previous home run landed in apparent violation of the official Home Run Derby rules (yes, those are a thing). And yes, it seems somewhat silly to argue about technical rules in the home run derby, but as Dustin Gouker points out at The Lines, legalized betting makes that a more interesting discussion:

Again: Who cares if the rules are bent? It’s just the Home Run Derby, not something important like electing a president or regulations on polluting the water.

The only part you and I should care about it is when sports betting becomes involved.

The Home Run Derby is fun to watch. But you know what makes it more fun to watch? Betting on it. The game was booked in Nevada and at least some places — including at the FanDuel Sportsbook — in the New Jersey sports betting market.

Some people obviously bet on the Chicago Cubs’ Kyle Schwarber, the other finals participant to win the event, and seeing Harper win it with a loose interpretation of the rules didn’t go over well in some portions of sports (and sports betting) Twitter.

No, no it did not. Some examples Gouker cites:

When you bet on Schwarber to win the HR Derby and you just watch Harpers dad throwing baseballs like this while you’re supposed to wait for the balls to land. pic.twitter.com/aYiJIHrNn1

That is correct and everyone who bet on Schwarber should feel cheated. Where was the integrity in that contest? A hot topic on @VSiNLive tomorrow morning.

I bet money on Schwarber, Dan. So I, like many, would appreciate a fair fight. That's all. If they aren't going to enforce the rule then simply get rid of it.

That last one is a good point here. MLB certainly isn’t required to have a rule against throwing new pitches before the last hit lands; that’s their choice. But having that rule on the books and not enforcing it (and that wasn’t just with Harper; some noted that it wasn’t enforced for Schwarber in an earlier round) looks worse. And while that’s a relatively minor issue without betting (does the winner of the Home Run Derby really matter?), it’s a more significant one with betting involved.

Now, Gouker notes that in the states with legalized gambling so far, MLB isn’t involved in determining what can be bet on. But while Manfred’s comments about MLB’s desire for laws that “allow us to protect the integrity of our sport” are presumably meant about actual games, they should be considered when it comes to events like the Home Run Derby too. And if MLB does become more involved from an integrity perspective, they may need to tighten up the rules on even events like this.

“Did Bryce Harper break the rules of the Home Run Derby?” sounds like a silly argument, but it’s maybe one worth more consideration when MLB is seeking laws to let them “protect the integrity of our sport.” Whether the Home Run Derby has integrity, and whether anyone should bother betting on it, is debatable, but there are certainly some who bet on Schwarber who were disappointed with MLB’s enforcement of their rules.

1 thought on “Rob Manfred talks ‘opportunity and challenge’ of legal betting, but HR derby illustrates the challenge side”