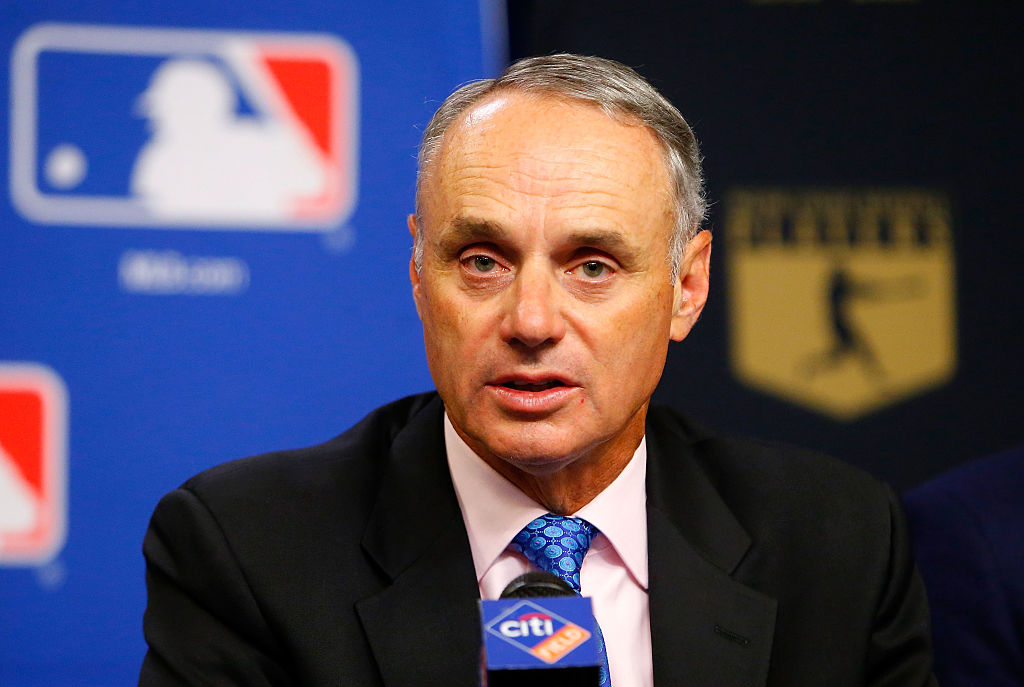 The Los Angeles Dodgers and San Diego Padres are playing a three-game series in Monterrey, Mexico, and understandably Major League Baseball commissioner Rob Manfred is on hand for the event. And with the games being in Mexico, this naturally led to the topic of league expansion.

Manfred was interviewed during the game and said he’d like to see MLB become a 32-team league. It’s currently a 30-team league.

The commissioner mentioned Mexico and Montreal as possible locations for expansion, though he was specifically asked about those locations, so it’s possible several locations are under consideration.

Rob Manfred said on @FOXSportsSD telecast that @MLB “would like to get to 32” teams, citing benefits to scheduling and playoff format. When asked about Montreal and Mexico, he said both are possible expansion locations. @MLBNetwork @LasMayores

On the SNLA broadcast, Rob Manfred says MLB would like to be a 32-team league.

By golly, we need more teams tanking. I am all for it.

But, according to Eric Stephen of True Blue LA, Manfred also said that MLB needs “to get Oakland and Tampa resolved, from a facilities standpoint, before [they] bite off another big project.”

More Manfred, on the possible expansion timeline: "We need to get Oakland and Tampa resolved, from a facilities standpoint, before we bite off another big project."

The news of Manfred wanting expansion is hardly surprising. And if MLB is going to expand, it makes sense to add two teams instead of one, to have 16 teams in each league.

And the locations mentioned for expansion are hardly surprising.

Manfred has named Mexico as a potential expansion location in the past and the league would obviously like to grow its popularity south of the border.

Perhaps the main question would be about the elements for a baseball team in Mexico. Last July, FanGraphs’ Travis Sawchik took a look at Mexico City, Montreal, and Charlotte as Manfred’s three expansion cities. As he noted about Mexico City, the elevation is 2,000 feet higher than Coors Field in Denver.

For starters, there’s the challenge of geography and topography. If you think Coors Field warps the game to too great a degree, consider that Mexico City is 2,000 feet higher in elevation.

Ben Lindbergh had a more in-depth look at Mexico City for The Ringer last July in his article titled, “Mexico City would be MLB’s highest home run haven.” Here’s an excerpt from that piece:

If you think Coors Field inflates offense or that the league’s current record home run rate is high, the addition of a Mexico City franchise would force another recalibration of your baseball beliefs.

Physics of baseball expert Alan Nathan estimates via email that the air density in Mexico City is only 76 percent relative to sea level, compared with 82 percent at Coors. According to Nathan’s calculations — holding all else equal except altitude — a “standard long fly ball” with a 103 mph exit speed and a 27.5 degree launch angle would travel 398 feet at sea level. At Coors, it would fly 427 feet. And in Mexico City, it would cover 438 feet. “The balls fly,” Coffey confirms. “It would be the highest home run ballpark ever.”

Nor can a humidor help, as it has at Coors and in Colorado Springs (where the Brewers’ Triple-A affiliate plays), and as it would in Chase Field, where the Diamondbacks hope to install one next season. The air in those environments is dry enough that a humidor set to 50 percent relative humidity has a significant effect on the ball. In Mexico City, the relative humidity during the summer months is considerably higher than 50 percent, so if a team were to store baseballs in the same conditions that the Rockies do at Coors, the balls would dry out and fly farther. Nor could a Mexico City team keep cranking up the humidor to, say, 90 percent or higher in a bid to dampen the baseball. “A standard MLB baseball stored at 100 percent [relative humidity], 70 [degrees] absorbs enough water to increase the weight to 5.6 oz., which is way outside the allowed range [of 5.0 –5.25 oz.],” Nathan says. “A humidor could not be used to mitigate somewhat the elevation effect, as was done at Coors, without increasing the weight an unacceptable amount.”

Most baseball fans have wanted to see baseball return to Montreal, and as Sawchik noted in his FanGraphs piece, Montreal has topped 2.1 million in attendance four times in their history. The spring training games held at Olympic Stadium over the last few years have generated plenty of buzz and been fun environments. You’d think Montreal fans would go all-out to show their support if an MLB team returned.

It doesn’t seem to be a question of if MLB expansion is going to happen under Manfred, but when. It’s probably still several years away, but it’s coming.